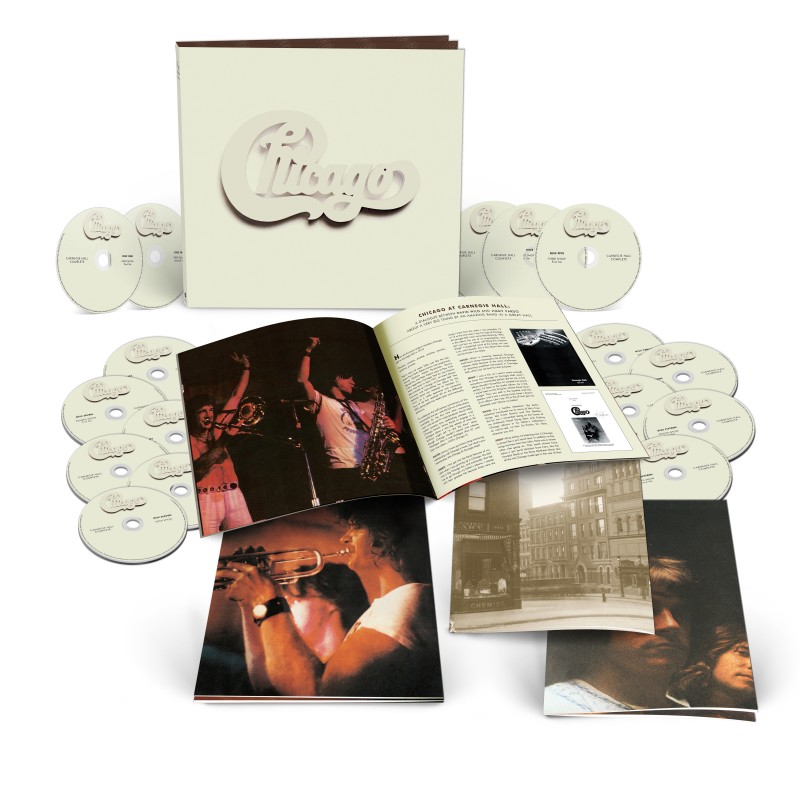 Chicago became the first non classical group to perform 6 nights in a row at Carnegie Hall 50 years ago. Between April 5th and 10th, 1971, the band played 8 shows at the celebrated venue, including 2 matinees, and recorded every one of them. In October of that year, performance highlights were featured on the band’s 1st ever live album, "Chicago At Carnegie Hall". That quadruple LP reached #3 on the Billboard 200, was certified platinum, and is still the band’s best selling live album.

To honor the 50th anniversary of Chicago’s historic concerts, the band will release all 8 Carnegie Hall shows in their entirety for the 1st time in a new 16 CD deluxe boxed set. "Chicago At Carnegie Hall Complete" will be available on July 16th, 2021, exclusively at Rhino Records.

"Chicago At Carnegie Hall Complete" is presented in a white folio that’s embossed with the group’s trademark logo. The set beautifully commemorates the event through memorabilia that includes replicas of the 3 posters that accompanied the original vinyl release and images of the original concert program, tickets, and other memorabilia from the historic run. The collection also comes with a 28 page booklet illustrated with photos from the concerts, plus new liner notes with contributions by Loughnane, archivist Jeff Magid, writer and producer David Wild, and comedy icon and Chicago fanatic Jimmy Pardo.

When Chicago arrived in New York City in April 1971 to play 8 shows at Carnegie Hall, the band was at the peak of its early experimental period and riding high on the success of the group’s 3rd consecutive platinum album, "Chicago III". For these historic shows, the band played a cross section of hits from their first 3 studio albums, including “Beginnings”, “Questions 67 and 68”, “Does Anybody Really Know What Time It Is?” and “25 Or 6 To 4”. The set also includes the previously unheard 1st songs from the 1st show, “Someday (August 29, 1968)”.