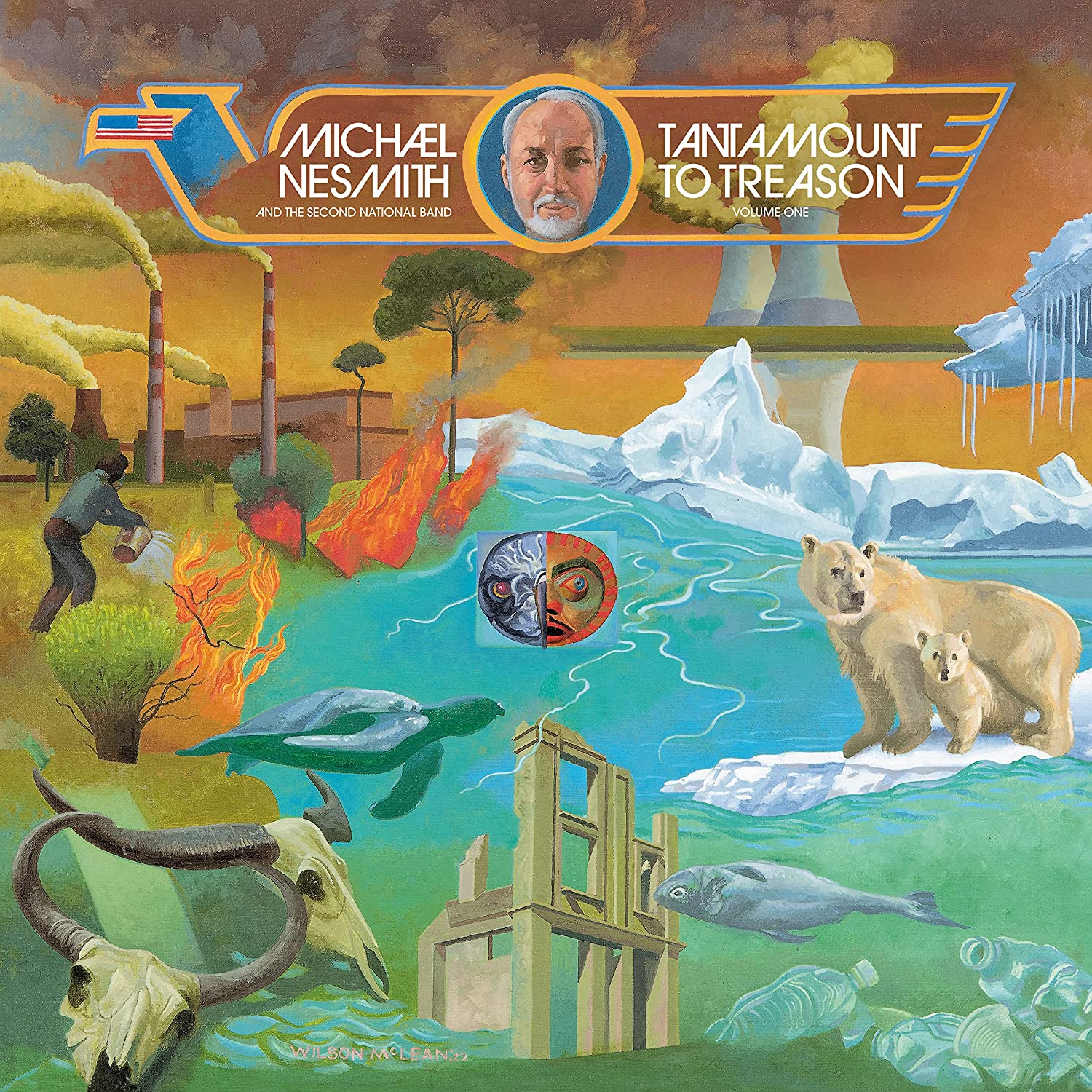 Even before the May 13th, 2022, reissue of Michael Nesmith's "And The Hits Just Keep On Comin" arrived from 7a Records, the Monkees focused label announced a 2nd 50th anniversary reissue from the late singer songwriter. On June 3rd, 2022, 7a will reissue 1972's "Tantamount To Treason Volume One" on vinyl and in an expanded edition on CD.

"Tantamount To Treason Volume One" was actually Nesmith's 1st album of 1972, preceding "Hits" by roughly 6 months. The LP was the 1st and only one credited to Michael Nesmith & The Second National Band following the dissolution of his First National Band. Joining him in this loose band was his longtime collaborator and band member Orville "Red" Rhodes on pedal steel, as well as Michael Cohen on keyboard and synthesizer, Johnny Meeks on bass, Jack Ranelli on drums, and Jose Feliciano on congas.

As Nesmith had done previously on "Nevada Fighter", he sequenced the album as 1 side of original songs and 1 of covers. His 4 psychedelically tinged originals ranged from atypically heavy to trippily mellow and hypnotic. Side 2's covers were eclectic, ranging from the George Jones chestnut "She Thinks I Still Care" to Pee Wee King's "Bonaparte's Retreat", a # 4 hit for Kay Starr in 1950 that was successfully revived as a # 5 country entry for Glen Campbell in 1974. "Talking To The Wall" was penned by Nez's old friend Bill Chadwick, author of numerous songs for the Monkees such as "Zor and Zam" and "If I Knew"; Nez had produced Chadwick's own rendition for a 1969 Dot single. Richard Stekol's "Wax Minute" became a fan favorite and found its way into Nesmith setlists decades later. Michael Cohen's "Highway 99" was melded to a sonic "Melange" while the main body of the song featured a delectably wry vocal from bandleader Nesmith and impressive turns for the band.

Though "Tantamount To Treason Volume Two" never materialized, Legacy Recordings' 2018 digital expanded edition premiered a mini volume 2 in the form of 5 outtakes. All 5 received their physical premiere from Second Disc Records and Real Gone Music on 2021's "Different Drum : The Lost RCA Victor Recordings" and now debut on vinyl, and are reprised on CD, with 7a's upcoming edition. These encompass reworkings of beloved Monkees classics penned by Nez ("Circle Sky", "Listen To The Band"), Earl Green and Carl Montgomery's truckin' tune "Six Days On The Road", the spontaneous jam "Tan My Hide", and an alternate instrumental track of the album's "You Are My One" with a brisker tempo and bossa nova feel.

7a's remastered "Tantamount To Treason Volume One" is adorned with a new painting by the original album's cover artist Wilson McLean, depicting an older Nesmith surrounded by colorful new imagery. The CD comes with a 32 page booklet, including liner notes, previously unpublished photos, and lyrics. The vinyl version is pressed on 180 gram aqua splatter vinyl and includes 4 of the 5 bonus tracks on side two, dropping the alternative "You Are My One".