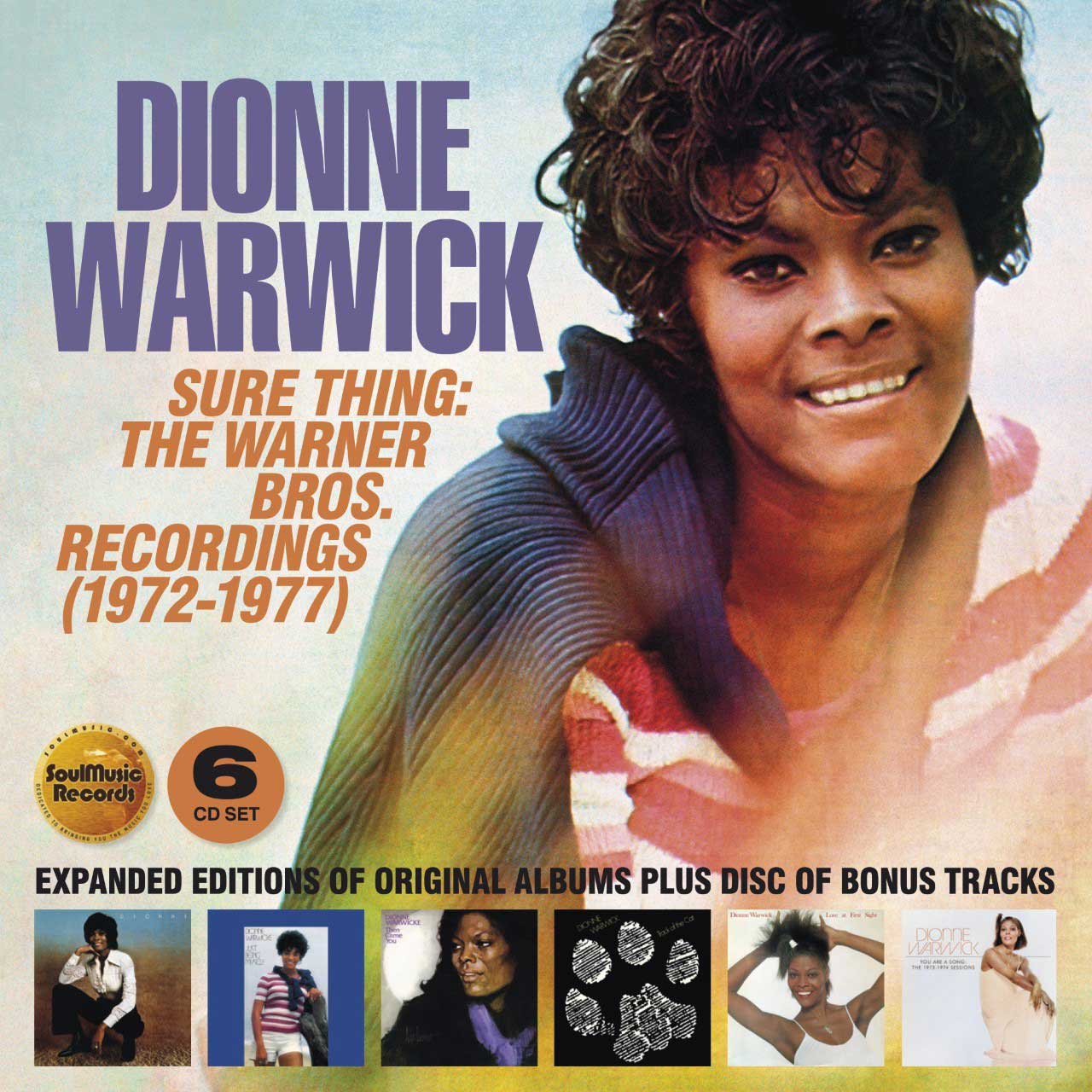 Between 1962 and 1971, Dionne Warwick put New York's Scepter Records on the map with over 15 original albums and 40 chart hits, more than 20 of which reached the top 40. 7 hit the top 10. Dionne earned her first 2 Grammy Awards during this period for "Do You Know The Way To San Jose" and "I'll Never Fall In Love Again", just 2 of the timeless songs of Burt Bacharach and Hal David, which she brought to stunning life.

In 1971, though, Warwick made the move to Burbank, California based Warner Bros Records. As she remembered in her 2010 memoir 'My Life, As I See It', "Scepter founder Florence Greenberg would soon be closing the label's doors, and I felt like I was being forced to leave my mother and sent to live with an uncle I did not know". Nonetheless, she felt supported by Warner Bros' Mo Ostin and Joe Smith. "I was promised the world: the same care that was given me at Scepter. They said I would be well promoted, produced at the same high level, and given the full support of concerts". She remained at Warner Bros through 1977, recording 5 very different albums, not to mention a host of non LP singles and over 2 dozen unreleased masters.

This was a period of creative exploration for the superstar singer in which she brought her trademark elegant sound into the realms of Detroit and Philadelphia soul, gleaming SoCal pop and deep soul. She also briefly added an "e" to her surname during this time. Amid all this activity, her duet with Warner Bros sister label Atlantic's top vocal group, The Spinners, yielded her very first # 1 hit on the Hot 100, the irresistible Thom Bell produced "Then Came You". Though frequently overlooked, Dionne's Warner Bros period bridges the storied Scepter period and her return to chart glory at Clive Davis' Arista label. That period was chronicled in 2020 on Soul Music Records' 12 CD box set "Déjà Vu : The Arista Recordings 1979 - 1994.

This adds up to the most comprehensive chronicle of Warwick's Warner Bros period ever, with 40 additional recordings supplementing the 5 original albums. "You Are A Song : The 1973 - 1974 Sessions" presents the artist's collaborations with Nickolas Ashford and Valerie Simpson, including the previously unreleased, full length version of "We Need to Go Back", which clocks in at over 7 minutes, Randy Edelman, and Tony Camillo, whose 7 productions for Dionne, previously released by the late producer on various European CD's, are making their official debut here as licensed from Warner Music Group, as well as the 1974 reunion session with composer conductor-producer Burt Bacharach, which yielded 3 extraordinary and musically expansive songs with lyrics by Neil Simon and Bobby Russell.

All of the album outtakes which premiered on Real Gone Music's remarkable 2013 compilation "We Need To Go Back : The Unissued Warner Bros Masters" have been appended to their proper LP's, including stellar material helmed by Holland, Dozier and Holland, Jerry Ragovoy, Thom Bell, and the team of Steve Barri and Michael Omartian. All 7 productions recorded by Dionne with Joe Porter in 1976, only 2 of which were released at the time, are also included on the "Love At First Sight" disc and compiled together for the 1st time. Finally, numerous unique single edits and mixes, including the extended version of "Track Of The Cat" and "Just As Long As We Have Love", the b side of the chart topping "Then Came You", are part of this deluxe package.

"Sure Thing" has been co-produced by Soul Music Records founder David Nathan and The Second Disc's Joe Marchese. Its 6 discs are housed in a clamshell case alongside a thick 40 page, full color booklet with rare color photos and a new, near 10 000 word essay by Joe Marchese drawing on previously unpublished quotes from Dionne Warwick, Burt Bacharach, Thom Bell, and Brian Holland. A full Warner era sessionography by David Nathan is also included. John Sellards has contributed the artwork in the Soul Music style and Nick Robbins has newly remastered the audio from digital sources provided by Warner Music Group.

"Sure Thing : The Warner Bros Recordings 1972 - 1977" promises to be the definitive chronicle of Dionne Warwick's years at the label, placing her 5 albums and 40 bonus tracks in full, illuminating context for the first time. It's due on February 17th, 2023, from Cherry Red and Soul Music Records.