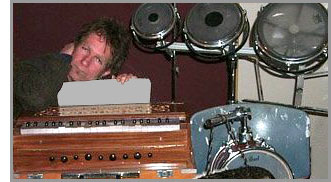 Oldham left school at sixteen to work for fashion designer Mary Quant; became a publicist who helped Brian Epstein promote the Beatles in their early days; and helmed the Rolling Stones' rise to glory as their manager. He spends part of his time each year split between Vancouver, British Columbia and Bogota, Colombia.

Porteous, born in Victoria, British Columbia, schooled in Nanaimo and lives in Vancouver but has been a world traveller supporting previous albums that have been released in the US, UK, Canada, Italy, The Netherlands and Germany. Previous releases have reached the Top Ten on the Gavin Report's "Americana" chart and the video for the title track of his last release was in the National Canadian Bravo Top Ten list for 20 weeks.

In theatre, Wyckham has received back to back Jesse nominations for "Outstanding Sound Design" and "Original Composition".

He and Oldham have created a quiet, comfortable record that mostly features Wyckham's original tunes. However, Oldham remembered his early days in the business when he worked for The Beatles and felt this album should include a cover of "Please, Please Me", but recorded as it was meant to be when it was written. Originally it was a tribute to Ray Orbison and copied his slow and methodical way. George Martin requested that the tempo be upped considerably for The Beatles released version.

Playing a hunch, the track was previewed on two BBC Radio 1 programs in late winter generating a tremendous response from listeners. With just 3 spins each on two shows over 500 emails were generated demanding that the track be released for sale to the public. With the album completed, titled "3 AM", it will be scheduled for release shortly.