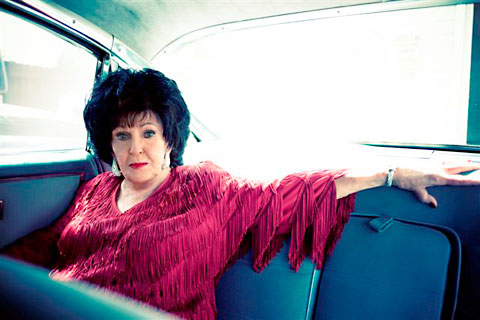 “She’s like my rockabilly Etta James. I love her, she’s so brilliant. I don’t think ‘Rollin’ In The Deep’ would exist if it wasn’t for Wanda Jackson” ~ Adele

“Wanda Jackson, an atomic fireball of a lady, could have a smash hit with just about anything” ~ Bob Dylan

“There’s an authenticity in her voice that conjures up a world and a very distinct and particular place in time. It’s not something that can be developed” ~ Bruce Springsteen

'Unfinished Business', the new album from legendary singer Wanda Jackson, will be released October 9th, 2012, on Sugar Hill Records. This is Jackson’s 31st studio album and marks the producing debut of fellow renowned musician and songwriter Justin Townes Earle. Of working with Earle, Jackson comments, “From day one I really liked Justin’s idea to take me back to my roots and make a record of country, blues and rockabilly songs. The band was extra tight and great to work with during the whole process. The record just sounds terrific and I’m hoping that my fans enjoy listening to it as much as I enjoyed making it”.

'Unfinished Business' continues Jackson’s unparalleled five-and-a-half decades of influential and groundbreaking music making. Recorded in Nashville at House of David Studios in early 2012, the 10-song album features renditions of “California Stars” (Woody Guthrie, Jay Bennett, Jeff Tweedy), “Pushover” (Billy Davis and Tony Clarke), “It’s All Over Now” (Bobby and Shirley Jean Womack) as well as a duet with Earle on “Am I Even A Memory” (Greg Garing).

The new album follows Jackson’s 2011 Jack White-produced 'The Party Ain’t Over', which received both widespread critical and commercial acclaim. Of the record, NPR Music raved “At 73, she still exudes a youthful sound and spirit, and decorates her unique voice with an effortlessly deep and gravelly swoop at the most unexpected times”, while The New York Times noted Jackson “still sounds fantastic, and her gnarled, feisty vocals are a good fit with Mr. White’s scrappy production”. Moreover, the album found Jackson enjoying her first ever charting on the Billboard 200 chart, peaking at #58. Jack White declared “Jackson is influential to every modern female singer, whether they know about her or not. She broke down those walls in the beginning, when it was the hardest to do”.

After performing to sold-out audiences across the country last year, including a 10-city tour supporting Adele, Jackson embarks on a series of performances this fall, including a special show at New York’s Highline Ballroom on October 12. Critically praised for her recent live shows, The Los Angeles Times claims “…she’s still fired up with power and sass”, while the Minneapolis Star Tribune adds “Holy moly, what a powerhouse. This tiny woman in red fringe and jet black hair can still sing with the same power and pizazz of the girl a quarter her age. Her voice still shifts effortlessly from warbly to scratchy to clear as a bell, and still has that girly then sultry then girly then again sultry quality about it”.