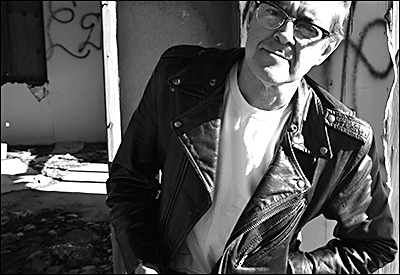 Urban Desert Cabaret is the musical project of Joe City Garcia. It is a place where Joe City creates and plays music that breaths the great American Southwest. From his youth in Northern New Mexico, and throughout a stretch of time in Los Angeles and the California desert, Joe has been playing everything from Tex Mex folk to garage phychedelia to punk rock.

In the mid 90’s, along with a few other notable musical pilgrims, he became part of an early Joshua Tree, CA, music scene that revolved around Fred Drake’s groundbreaking Rancho de la Luna Recording Studio, recently featured in the Foo Fighters ’Sonic Highways’ HBO series. During that period, Joe was introduced to L.A. author, journalist and performer, Rubén Martínez, who invited him to co-write and record music for a theatrical project called Border Ballad. Subsequently they toured and performed in New York, Boston, Washington DC Los Angeles, Northern California and other places in between.

“Joe City Garcia sings from a body that has shot through both heaven and hell and some of the most heartbreakingly beautiful desert landscapes that lie in between”. ~ Rubén Martínez

In 2014 Joe reconnected with old friends in Joshua Tree, out of which emerged a body of newly inspired music in the form of ”Sometimes The Angels”, recorded at Back Of The Moon studios and released in 2015. A follow up, ”Shadow Of A Ghost”, recorded at Red Barn Recorders, has just been released. Each release has culminated in European tours throughout Austria, Slovakia, Poland and Germany, as well as Southern California, and a 2017 tour is being planned.

These days, when not on tour, Urban Desert Cabaret and Joe City can be found writing, playing and recording new music back in the ever inspiring high desert of California. Urban Desert Cabaret loves to travel and perform, and is eager and ready to play shows wherever and whenever possible.