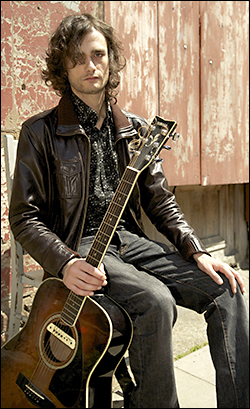 Trent Miller hails from just outside Turin, the ‘Capital Of The Alps’, in Northern Italy though now resides in London. Since first arriving here in 2006, his fusions of folk, rock, goth and americana have seen him attract a growing following.

His debut album "Cerberus" was released in 2009 on his own Hangman Records label (later reissued through Bucketfull Of Brains). It quickly gained wide acclaim, receiving substantial press coverage and airplay, including Cerys Matthews on BBC6. He returned with a second collection of arresting country-folk "Welcome To Inferno Valley" in 2011.

This was the 1st full-length album released on the Bucketfull Of Brains’ label, directly affiliated to the legendary magazine, the first UK champions of the Paisley Underground and R.E.M. – and as adept as ever at unearthing and supporting maverick talents. It bought more favourable notices, Q Magazine described it as a ‘darkly underground mix of hangovers, anguished love, mournful blues and lonesome country’ and the Daily Mirror declared ‘fans of Gene Clark, Townes Van Zandt and Guy Clark will recognise a kindred spirit in his glowering meditations and steely worldview’.

Trent and his band – Graham Knight (bass, piano and backing vocals), Steve Brookes (drums) and Barbara Bartz (violin) plus guests Ben Walker (electric guitar) and Paul Cuddeford (electric guitar and lap steel) – then entered Chris Clarke’s Reservoir Studios to record "Burnt Offerings", his most ambitious project to date. It was the culmination of a period of working-up and rehearsing that represented a step towards a more modern, electric-oriented sound, strongly influenced by such totemic bands as The Gun Club and Thin White Rope.

This is the most adept and talented collection of musicians Trent has worked with thus far. As his right-hand man Graham Knight, formerly with Jason McNiff and Harry Oakwood, plays a similar role to Tony Garnier in Bob Dylan’s band. In-demand drummer Steve Brookes also plays with Danny And The Champions of The World and Ahab, and the busy Barbara Bartz also works with Dan Raza and Simon J Alpin among others. Turning to the guest guitars: Ben Walker is a recent BBC Folk Awards double nominee (for his partnership with Josienne Clarke) and Paul Cuddeford currently plays with Bob Geldof having previously been in Ian Hunter’s band.

For live performances the band is now augmented by ace guitarist Paul Lush, also of Danny And The Champs and previously with Alan Tyler’s Lost Sons Of Littlefield.