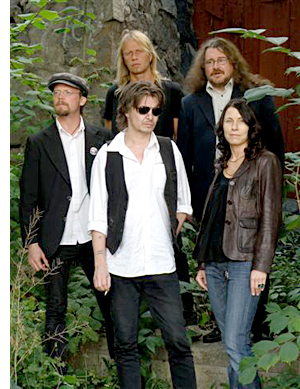 The story of Trailerpark Idlers began in September 2006 when Morgan Hellman and Magnus Larsson teamed up with Jerker Andersson and Gunnar Nilsson to start a country band that would go a little beyond the genre. With influences from traditional country such as; Hank Williams, Carter family and Johnny Cash, to rock and punk acts like Rolling Stones, Motörhead and Ramones, Trailerpark Idlers came up with a sound of their own. A year later Ben Dee Salmenranta replaced Nilsson and in February 2008 Miss LisaLee joined to make the band complete
.
The band is, with the exception of the bass, strictly acoustic. The two lead singers, Morgan and Miss LisaLee, brings a variation in to the music, from raw and mean to nice and sweet. The lead instrumentalist of the band, Jerker, alternate between mandolin and accordion while Magnus beat the drums and Ben Dee ad some bass to it.

Trailerpark Idlers are into a never-ending recording session. Though they has exist as a band less than three years they have released six CD’s so far. They have their own recording studio called “The Forge” and their own label called “Something Wicked”.