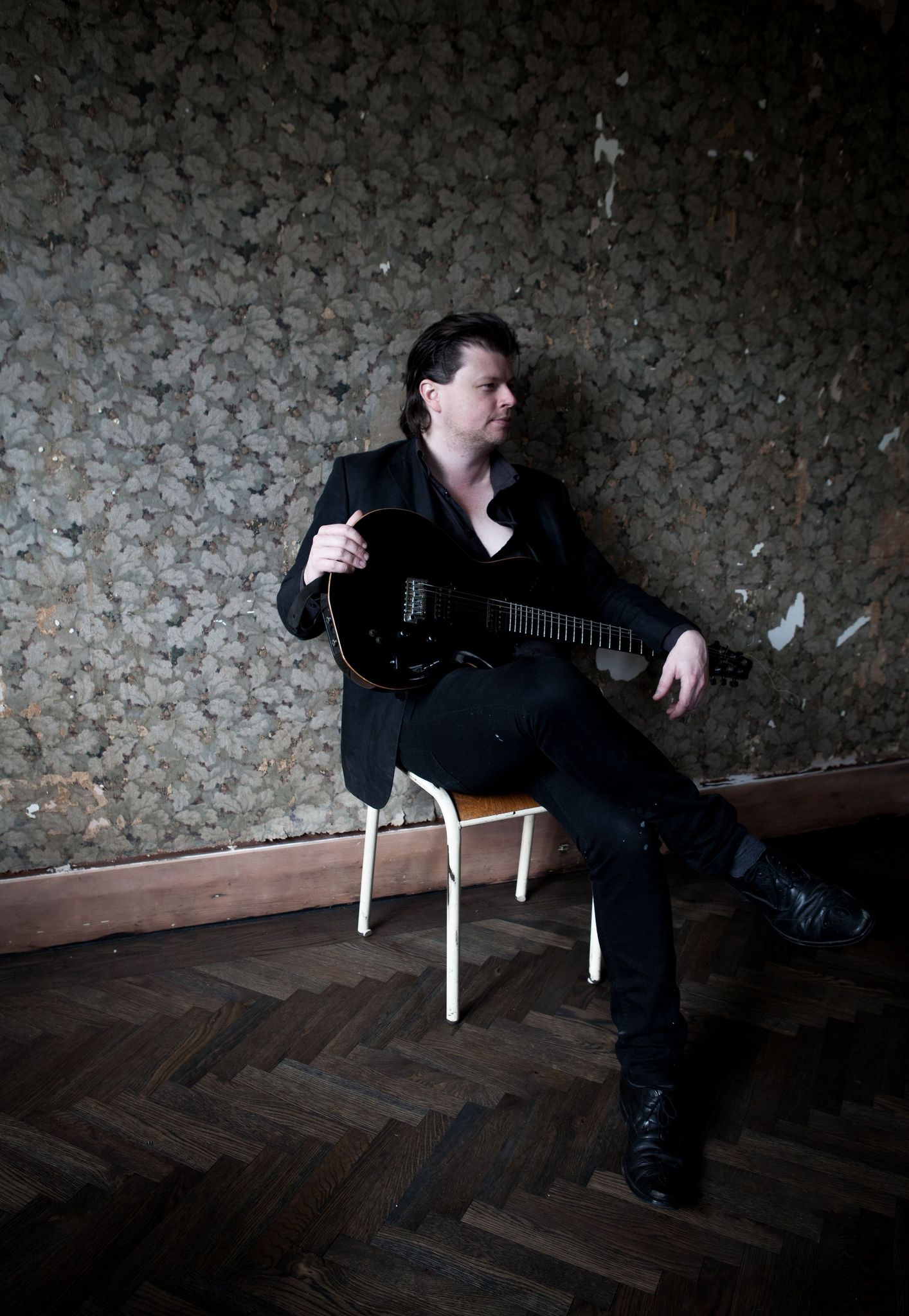 Novelists famously use their day jobs for material, guitarist Tom Rodwell mines his crossover blues career with a writerly taste for the surreal on "Wood & Waste", a decadent and charmingly outré collection, released on October 22nd, 2021.

An English artist presently moored in New Zealand, Rodwell’s revival of blues music as a vehicle for dance has been supple enough to embrace rhythms from spirituals and calypso, and seen him support acts like Otis Taylor, CW Stoneking and Leon Russell. A parallel career as a session player has seen him moonlight live and on record for artists as diverse as Lonnie Holley, Robert Lamm and Don McGlashan, and delve into a host of avant jazz projects.

In his own songs, Rodwell’s secret weapon is feel. “All the clues to a song are contained in the 1st bars of a primitive rhythm guitar part, it’s my job to inhabit that space and gradually tease the rest out”, he says. “You just have to pay attention when a song makes a left hand turn”.

Consequently his songs resemble ragged short stories, cobbled together genres from an alternate history. “The aim is to locate each song in a very specific room of its own, with contrasting feels like layers of paint or old wallpaper. That can result in a take that’s seductive and seasick all at once”.

Lyrically, the slip of the tongue is right at home on "Wood & Waste", many of the numbers speak in a late night jumble of double entendres and stream of consciousness. “I want to give the subconscious some legroom”, Rodwell says. “And to me a song is successful when the exact tone is hard to name, like the feeling of a strange dream you only half recall”.

The record opens with a slow mo slab of ‘misanthropic gospel’, “Don’t Be A Fugitive All Your Life” finds a Randy Newmanesque unreliable narrator admonishing his buddies from beneath a hangover of overcooked reverb, slippery slide guitar, and ramshackle percussion.

The percussion is from Chris O’Connor and Jeff Henderson, notorious New Zealand free jazz multi instrumentalists. They turn it loose on the absurdist one chord freak out “Touch Me Like A Teddybear”, with booming marching drum and splashing hi hat pitted against Rodwell’s unhinged guitar. “It’s perversely satisfying having these jazzmen churn out this meaningless bubblegum”, Rodwell jokes. Meanwhile his own elaborate rig adds a shimmering polyphony, multiple amps and a revolving Leslie speaker creating the illusion of a bass player.

Improvisation is a key theme of "Wood & Waste", where frequently a skeletal idea transforms into a fleshy dance rhythm. “Keep On Knockin’” subverts a determined Bo Diddley beat with dissonant mellotron in praise of Edward Hopper and William Morris. “Plenty Time” is a species of prog rhumba set in Roman Britain, indebted to Nigerian giant King Sunny Ade. Elsewhere there’s satirical funk on “Small Town”, the Beach Boys bossa of “Make Believe” and mythic doo wop on “Carry On”.

The album’s centrepiece is “She Got Me Boiling”, a juggernaut of psychedelic calypso welded to mindless riffs on cannibalism that would make the Mighty Sparrow blush. Driven by a bass heavy guitar pulse and animated carnival drums, it’s a fiendishly irresistible piece of music. Against that lusty fever dream, a sickly waltz of slide and synth evokes the intergenerational nightmare of war, “Dead End Road” a reminder as the album closes that music is concerned with pain as much as pleasure.

"Wood & Waste" was tracked and mixed entirely on tape without click track or edits at Neil Finn’s Roundhead Studios, an analog sanctuary built around The Who’s old Neve console. The discipline in the studio sparked alchemy in the sessions. “Using tape means making decisions without a digital safety net, and living with the consequences”, says Rodwell. He produced "Wood & Waste" alongside the safe hands and cool head of Raphael Mann, with engineering by Jordan Stone and analog mastering and lacquer from Los Angeles legend Kevin Gray (Blue Note, The Beach Boys). The 1st run of the LP, care of Pallas, Germany, is the end product of an entirely analogue signal chain.

Rodwell’s 1st full length was 2012’s "Live Humble", an inward looking set of spirituals, work songs and self described 'oddball improvisations'. “Live Humble was a warping of tradition. The new record is liberated from it”.

"Wood & Waste" is what used to be called a cult record, a set of warmly anarchic influences and timeworn qualities that is Tom Rodwell’s trademark.