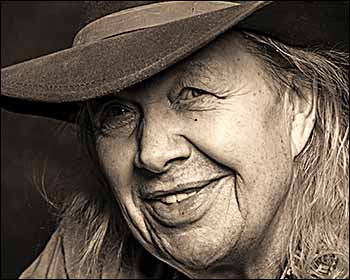 Anyone who has ever heard a Tom Peterson song recognizes immediately that this is a songwriter’s songwriter, a master wordsmith who is worthy of every accolade the creative community bestows. A native of Sioux Falls, South Dakota, who has spent a good part of his life there, Tom’s career trajectory hasn’t led to widespread name recognition, yet, but his talent is true, his writing is world class and his audience is loyal.

While living in Taipei, Taiwan, where his dad was stationed, Tom received his first record player at the age of 4 and Elvis Presley records set him on his life path. Tom was intrigued by the names in small print under the song title, the songwriters. He has been writing songs ever since.

During his childhood in South Dakota, piano lessons, singing in the choir at the Cathedral Grade School and picking up the guitar as a young teen all helped Tom build enough of a musical foundation to craft the songs that have been coming steadily since before he could even read.

For most of the 1970’s Tom was playing music and setting a very high songwriting bar for fellow band members and friends who were part of the midwest music scene at that time, bands like Red Willow Band, The Rocky Mountain Oysters, Blueberry Buckle and Mission Mountain Wood Band.

In 1979 Tom moved to Boulder and then Nashville a couple of years later. Creative people are drawn to creative communities, and both cities offered inspiration that fed Tom’s creativity. Indeed, he literally fed Nashville songwriters while working at the legendary Brown’s Diner and forging friendships over conversations across the counter with some of the best songwriters of the time. Upon returning to South Dakota in 1984, Tom continued writing while working in production at KDLT.

A massive heart attack in 2013 came close to robbing the world of any more Tom Peterson songs. Thankfully, with the support of good friends and good medical care Tom survived to face a long, slow recovery. His induction into the South Dakota Rock And Roll Hall Of Fame in April 2015 was well deserved and a hopeful turning Point.