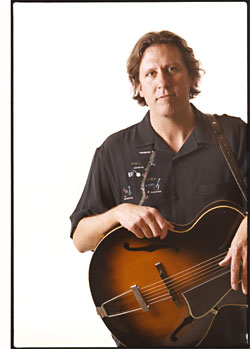 The album came together once Corbett realized he was writing songs “with a Western bent.” The melodic title track’s key line — “I may never have touched the ground of freedom but tonight I ride” — was inspired by a trip to the Checkpoint Charlie Museum in Berlin, of all places, while “17 Miles A Day” looks at Western pioneers’ race against time and winter snows. “Welcome to Tom’s Place” celebrates the simple pleasures of fishing and friendship with some gleeful picking by Corbett and a posse of fellow Toms (Ball, Lackner, Lee, Rozum and Sauber), and the carefree birthday polka “Doce de Mayo” provides all the excuse needed for Corbett to jam with Los Lobos percussionist Victor Bessetti and Conjunto Los Pochos accordionist Otono Lujan and guitarron player Lorenzo Martinez.

“Ease On Down The River,” previously heard on the 1994 album 'The Cat’s Meow' by the Acousticats, the critically acclaimed folk-bluegrass-swing ensemble Corbett played with in the 90's, reunites him with a pair of longtime friends and musical heroes. “To redo ‘Ease On Down The River,’ with Herb Pedersen and Bill Bryson singing harmony, felt really good”, he says. “I’m really happy with the whole album.”

'Tonight I Ride', which follows 2001’s 'Upstairs At Charlie’s' and 2004’s 'Cloudless Blue Sky', is a crisply produced showcase for Corbett’s wit, warmth and creative versatility. It also shows him settled into a more peaceful phase of his life, sizing up the past and savoring the present. It’s another admirable achievement on his noteworthy resume. Long an active member of LA’s acoustic music scene, Corbett has toured with folk duo Robin & Linda Williams and Nitty Gritty Dirt Band multi-instrumentalist John McEuen, recorded several tracks on Social Distortion frontman Mike Ness’ rootsy solo album 'Cheating At Solitaire', and joined McEuen, Jimmy Ibbotson, Jennifer Warnes and Laurie Lewis in the award-winning 2002 DVD 'Nitty Gritty Surround'. More recently he taught Tom Selleck how to play ukulele for a role, and provided music for the Ted Haggard-themed play 'This Beautiful City' at Centre Theatre Group in Los Angeles. He just played a string of European dates and is currently booking dates for a U.S. tour.