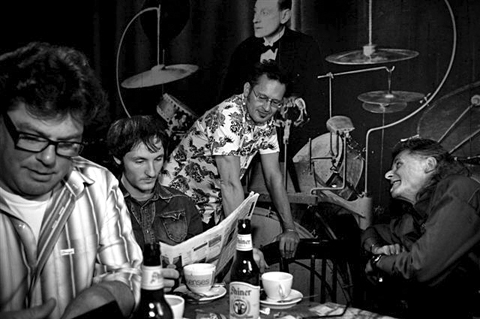 In the many reviews that appeared after the release of the Shiner Twins’ second album 'Southern Belles', the band has been hailed as the hottest roots-band from the Netherlands, and some reviewers even described the band as the best roots-band in Europe, judging the album as “a milestone in the genre”.

The band’s unique blend of southern soul, rhythm & blues, country, traditional gospel, New Orleans funk, texmex and singer-songwriter oriented material makes them anyhow stand out in the widely varied Dutch roots- and americana-circuit. That’s one of the reasons why the band was invited to play at all the important festivals in the Netherlands and Belgium in the spring and summer of 2009.

The initial roots of the Shiner Twins are located in Austin TX. When founding bandmember Jack Hustinx was living there in 2001/2002 he was asked to put together a European touring-band by Austin’s legendary powerhouse-singer Malford Milligan (ex-Storyville), and so he did. After three very successful European tours and one tour in and around Malford’s hometown Austin - to celebrate the release of the critically acclaimed 'Sweet Cherry Soul' album - this co-operation came to an end. Because the remaining bandmembers agreed that there was this “undefinable chemistry” every time they played together they decided to continue as a band, the Shiner Twins, with their own material, written by both Jack Hustinx and Richard van Bergen, the band’s two lead-vocalists and guitarists. Richard is considered to be one of the most talented roots-guitarists in the Netherlands, probably the best slide-player in the country, heavily influenced by co-players like Bonnie Raitt, Lowell George, David Lindley and Ry Cooder.

In October 2006 the band’s debut-album 'All In Store' was released, and almost instantly this CD was hailed by every magazine and website as one of the most excellent and original roots-CDs ever to come out of the Netherlands. The CD entered at a #2 position in the Euro Americana Chart and gained a lot of airplay on national radio. The name Shiner Twins was put on the map, and the band played almost continuously in the many clubs, theaters and festivals throughout the Netherlands and Belgium. This definitely contributed to the outstanding live-reputation of the band, not only through their solid musical craftsmanship and haunting vocal-harmonies, but also as being one of the most honest and intensely playing rootsbands you will ever see. All four Shiner Twins members are true, convincing and experienced roots-junkies that have been playing and recording with many different bands and artists for more than 25 years.

Two years after the release of their debut the Shiner Twins launched the eagerly awaited follow-up entitled 'Southern Belles', an even stronger mix of styles, adding more traditional southern gospel to their music, featured in 13 new intriguing Shiner Twins originals.

In their native Netherlands every rootsmusic-fan is proud that this soulful roots-combo is coming from their country, now it’s up to the rest of Europe to get to know the Shiner Twins…..