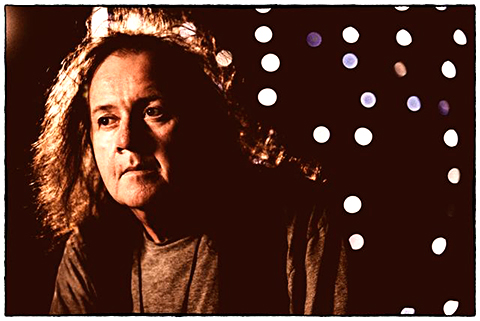 With their unceremonious ejection from the EMI gravy train at the end of the 70’s, it seemed that The Saints were finished. Relieved to be ditching such troublesome clients, EMI overlooked what The Saints had left them; 'Prehistoric Sounds', a criminally neglected R'n'B masterpiece - maybe the most gorgeous suicide note a band ever left. The album was as uncompromised (and therefore doomed) as most other great cult albums, but it contained the seeds of songwriting that strongly contradicted the premature demise of The Saints.

Returning in the early 80’s with the tellingly entitled 'Paralytic Tonight, Dublin Tomorrow' (released on the all new French label, New Rose), Bailey buried any doubts over whose exclusive domain the band had become. Having been left in the lurch by record company and band members, The Saints were now about Bailey and whichever band members made the hallowed grade. Never looking back, Bailey turned The Saints back on, and the outpour commenced.

It was 1984 when Bailey reached a new peak, and it was called 'Ghost Ships'. In one stroke the song absolved the sins of a thousand bands lacking the ingenuity, integrity, guts and smarts to wait, watch, listen and learn. To this day, 'Ghost Ships' is a haunted, haunting affirmation of everything that Bailey has done.

Alien to complacency, Bailey pushed his own limits, and those of his band, reaching a new peak in the 90's with 'Prodigal Son'. An album redolent of his beloved Irish roots, rich in references to literature and legend and containing some of his most beautiful songs to date, 'Prodigal Son' announced the emergence of a new Bailey, more confident and with his demons held firmly in check.

Having made The Saints a minor household name, Bailey chose to soldier on as a solo artist. A series of superb albums followed at frequent intervals, including 1994's '54 Days At Sea', recorded in Scandinavia with a Bolivian folk group he first met playing at a street festival. Abounding in all the usual allusions and delivered in a voice that he now exercised like a whipped mongrel, '54 Days At Sea' felt like another watershed, another self-contained detour in a career of musical swings.

In 1997, Bailey returned to The Saints. The result was the outstanding album, 'Howling'. Bailey was back on another pilgrimage. Recorded fast, loose and with no shortage of great songs, 'Howling' is a loud, proud return to the band ethic of The Saints.

A year later, following the reinvigorated, perpetually changing band route, The Saints released the rip-roaring album 'Everybody Knows The Monkey'. Recruiting unknown, but feisty musicians, Bailey returned to the no-nonsense guitar rock he last perfected on 1982's 'Out In The Jungle'. Strained by the demands of agitation, volume, and passion, Bailey’s gigantic voice is given free reign by a band of heavy-hitters. The opening track, 'What Do You Want', perfectly sums up a career that has continually crashed, burned and risen from the subsequent wreckage.

For the new millennium came a new Saints album, albeit one that paid homage to the folk that carved out the music many of us live by to this day. 'Spit The Blues Out' features eight original tracks of awesome power and divine intervention, coupled with four cover versions of classic blues songs to which Bailey’s voice does ample justice. Recorded in Amsterdam, the album highlights Bailey's songwriting at its best, mixing originals and covers that reflect the grim and greedy theme park we live in today. Drinking songs, sad songs, rocking songs and fuck songs. Songs that speak to you of the world. 'Spit The Blues Out' captures the power that was injected into rock‘n’roll when rock‘n’roll was full of sex and danger.

In 2005, still resident in Amsterdam, The Saints released 'Nothing Is Straight In My House'. Featuring twelve new songs, hammered into shape in a three-week creative furnace, the record is a loud, noisy, passionate and demented mapping of the surreal psychotic soul of our surroundings. The songs are inspired by the fear and loathing of our times and reverberate with rock 'n' roll’s primal energy.

Following swiftly came 'Imperious Delirium', recorded at Stollywood Studios in Amsterdam. Fanned by the flames of an ill wind and wanton war-mongering, the record delivers a tirade against prevailing times. It is a literal howling at the insane behavior of the outlaws who make our laws and it represents some of Bailey’s most political writing. Along the way, however, love songs prevail in the shape of the wonderfully titled 'Je Fuckin T’aime'.

Which brings a common theme up to date, that being the impending release of 'King Of The Sun', a brand new collection of songs of love and dereliction by Bailey and his latest incarnation of The Saints. Recorded in Sydney and released on the Highway 125 label, the album portrays a journey home after a hundred-year war. Bailey’s writing and singing have never sounded more majestic. His is the voice of a world-weary conscript who got more than he signed up for but never shirked the task. Accompanied by piano, strings and horns, (the very sound that got The Saints dropped by EMI) 'King Of The Sun' could be viewed as a beautiful swansong to a formidable campaign. Then again, don’t bet on that.