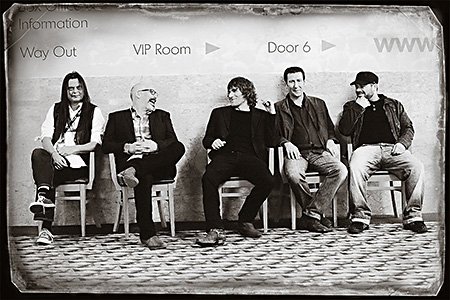 The New Madrids were formed in 2010 by the four remaining members of americana stalwarts $outhpaw and the lead singer-founder of rock and blues degenerates The Revivals.

$outhpaw had rumbled to the end of the line after five years of touring the UK from the Orkney Islands to The Borderline in London, a televised show for the BBC, trips abroad to NXNE in Toronto and festivals in Norway where they met and played alongside several Austin legends such as Rick Broussard, Brennen Leigh, Jesse Dayton, Hayes Carll and Nanci Griffith among many others.

Like any band who lived as they played, there were casualties along the way including the odd hotel room, a dog that got too close to the tour bus, many broken hearts, even more broken laws and a couple of divorces, and so it was with both regret and relief that $outhpaw played their last show on New Years Eve 2009 in their home town of Perth.

The Revivals had their very own rock'n'roll pedigree – a bit younger than their local country rock peers they had also been gigging up and down the UK for several years, enjoyed two stints at SXSW, radio appearances and much prominence on the local and national scene. Eventually those enemies of rock'n'roll youth – mortgages, bald spots and bad choices – brought the curtain down on one of the most exciting bands of that time and place.

Fate wouldn't wait around for long though and a matter of months after both bands called it a day phones started ringing, meetings were arranged, beers were drunk and records listened to, The Band, Whiskeytown, Drive by Truckers, Black Crowes, The Byrds, AC/DC, etc. All of these influences combined with a defiant Celtic soul and The New Madrids were born.