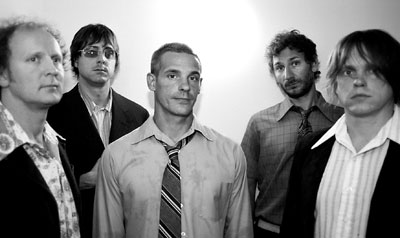 The story of the Honeydogs begins in Minneapolis in the early 1990’s with two combative yet musically harmonious brothers, songwriter/guitarist Adam and drummer Noah Levy who wanted a band in which their favorite music-soul, American roots music, British pop, and punk--could coexist.

The band name has it’s origins in the Levy brothers’ Dickensian childhood. Mrs. Levy grew tired of caring for the demanding, precocious younger brother, Noah. He spent much of his lonely toddler-hood being babysat by the bee farm in their backyard and watching elder brother Adam play cardboard guitar to KISS records. Noah's earliest friends were bees—and what was the bee hive rack called in which those buzzing surrogate nannies made their home?...A honeydog.

The Levy brothers found a kindred spirit in bassist Trent Norton who had recently returned from a couple years touring the former Soviet Union and Western Europe in various bands. Together with John Fields and a few guests, Trent, Adam and Noah made the exuberant, eponymous debut, The Honeydogs (1995).
The band toured extensively in those early years, with the brothers Levy beating the fraternal crap out of each other across the Lower 48.
Guitarist Tommy Borscheid’s union with the band in 1995 helped fashion the band’s rough-and-tumble early signature sound on Everything, I Bet You (1996) for which Billboard magazine hailed them as “Alt Country’s Next Big Thing” in the mid 1990’s. “But Country was only one facet of what we are doing or interested in,” Adam says. “We liked Bowie and Jobim as much as the Flying Burrito Brothers and Merle Haggard.”

In the early days, Levy penned tunes like “Miriam,” a tribute to his late grandmother and her life immersed in social justice work. In “John Brown” Levy imagines how the abolitionist, if still alive, would view our current state of race relations. “Freak Show at the Fair” tapped into the alienation of people with disabilities and reflects on the society which excludes them.
Courted and signed by the majors, The Honeydogs produced Seen A Ghost (1997), their largest selling record. They were strange halcyon days, recalls bassist Norton “We toured with INXS weeks before Michael Hutchence’s death. We were feted and flown around the country and promised the moon.”

But their creative wanderlust and Levy’s ever-expanding songwriting and stylistic vocabulary led them down more obscure, albeit fertile, musical paths. The follow up to Seen a Ghost was Here’s Luck (2000), recorded immediately following two tragedies in the band—the departure of guitarist Borscheid and Trent Norton’s near death seizure. With howling guitars, soaring strings, melotrons, and dark psychedelia, Here’s Luck was a paean to the music business sausage grinder and the band’s indefatigable spirit.
With the addition of the angular, modernist/minimalist guitar work of Brian Halverson and the colorful, unfettered genius of Jeff Victor’s keyboard playing, the band’s live and recorded sound began to evolve.

Their 2003 release, 10,000 Years, received widespread critical accolades as “the Sgt Pepper of the new millennium, “Levy’s masterpiece” and “a rock opera that would make Peter Townsend cry”. Its conception and creation in 1999 predated 9/11 and eerily anticipated terrorist attacks on the West. Inspired by Levy’s 17 years of work with youth offenders, welfare-to-work participants and immigrant populations, 10,000 Years created a fan in Aimee Mann who released the record on her label and brought the band out on tour.
On their newest effort, Amygdala (pronounced uh mig’ dull uh), the band again teamed up with long time friend, collaborator and producer, John Fields, recording a marathon 5 day session in Minneapolis in fall of 2005. Guitarist Brian Halverson describes the session as “more raw and organic than the last few records.”
The amygdalae are almond-shaped groups of neurons in the brain which regulate emotions, specifically fear. All of Levy’s songs on Amygdala explore fear, obsession, addiction, and the idea that emotional experience forms human memory.

Among the guests on the new album are Aimee Mann and Dan Wilson (Semisonic).The journey for the Honeydogs from one-time American roots music torch bearers to contemporary art rockers has been a long and fruitful one and Amygdala is the Honeydogs’ most experimental yet accessible work to date.