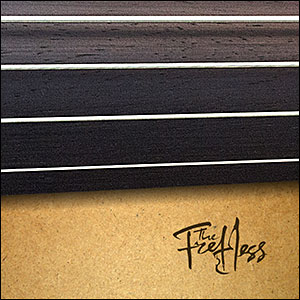 The Fretless is a new approach to folk music that is quickly gaining high acclaim around the world. This unique band is taking string music to fascinating places as it transforms fiddle tunes and folk melodies into intricate, beautiful, high-energy arrangements.

In November 2011, Karrnnel Sawitsky (fiddle), Ivonne Hernandez (fiddle), Eric Wright (cello) and Trent Freeman (fiddle) got together for the first time on Vancouver Island to start rehearsing for this project. After 10 days straight of writing, arranging, practicing and an absurd amount of tea, The Fretless emerged as a band.

With the release of their debut album "Waterbound" in early 2012, which features their fresh styles, compositions, as well as collaborations with singers Ruth Moody and Norah Rendell, the quartet grabbed the attention of critics and fans across many genres. This recording fueled a busy summer of festivals across Canada, a month long tour of Germany in the fall, and world wide sales and radio play. The year was capped with 3 awards, bringing the album, and the band further into the public eye. 'Instrumental Album Of The Year' at the Western Canadian Music Awards, and at the Canadian Folk Music Awards, the Fretless walked away with both 'Ensemble Of The Year', and 'Instrumental Group Of The Year'.

The band's 2nd release follows their multi award winning debut album ”Waterbound”. Recorded in Victoria, BC, with Joby Baker, this new album is a leap forward for the band and an adventure to listen to.

Musically, the goals of the group are to expand the rhythmic, harmonic and structured arrangement style of the many folk genres they play using only string instruments. There are countless fiddle styles across Canada and around the globe that have been stagnating over time, and The Fretless is working to incorporate a new approach and a new audience. As a band, all four members have come from very different traditional and contemporary backgrounds, and are influenced by a vast array of art. However they are unified in their goal to continually develop their amalgamated sound in order to push traditional music as far as possible.

The Fretless is an innovation in music that must be heard. They harbor all the energy of fiddle tunes, while shattering all expectations in writing, creativity and performance.