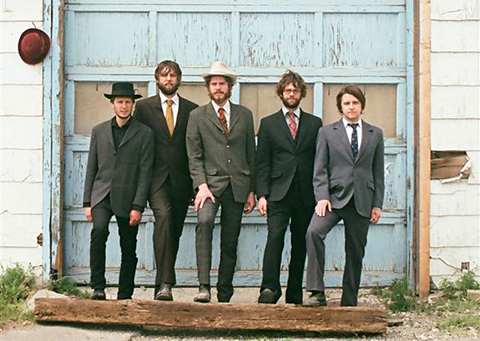 Two years after releasing the much lauded, Juno-nominated and Canadian Folk Music Award-winning "The Place I Left Behind", The Deep Dark Woods return with their 2nd studio album on Sugar Hill Records, "Jubilee". On October 1st, 2013, the Saskatoon, Saskatchewan natives emerge from the wilderness with the new project, which is a celebration of community, camaraderie and feverish cabin creativity. With "Jubilee", The Deep Dark Woods revel in the jangly, freewheeling days of psychedelic and electric folk (think Neil Young) while keeping their compass aligned with the magnetic, hypnotic north.

Recorded in a cabin in the shadow of the Rocky Mountains near Bragg Creek, Alberta, "Jubilee" journeys through folk and rock history, from California to the UK, from the 70's to the present day. Produced by LA-based folk revivalist Jonathan Wilson (Dawes, Bonnie Prince Billy, Father John Misty), the album nods to genre pioneers such as The Byrds and Fairport Convention, before heading into altogether new territory of soundscapes that bend and fluctuate underfoot. "Jubilee" moves the yardstick with its rolling layers of specialized keys, organs and analog rarities (e.g., novachord, celesta, vibraphone, and more) first used in the early days of psychedelic-synth experimentation, and the results sound at once in and out of modern time.

Since the release of 2011’s "The Place I Left Behind", for which the band received a Juno nomination, Americana Emerging Artist nomination and a Canadian Folk Music Award, the lineup has changed to include guitarist Clayton Linthicum. Linthicum’s talent for English style guitar playing shines on "Jubilee", in particular on the standout song “18th of December”. “It’s something we’ve tried in the past but haven’t been able to fully accomplish until Clayton joined up”, says vocalist-guitarist Ryan Boldt of the track, his “first attempt at a Fairport Convention-type song”.

Comprised of Boldt, Chris Mason (vocals, bass), Lucas Goetz (drums/percussion, vocals), Geoff Hilhorst (keys) and Linthicum, the tight-knit members of The Deep Dark Woods are old friends and trusted collaborators. Lead singer Boldt writes most of the lyrics, but songwriting credits on "Jubilee" are also shared with Mason, former bandmate Burke Barlow and new addition Linthicum. The band recorded "Jubilee" mostly live off the floor, which allowed for a collective and often spontaneous approach to songcraft. Lyrically, "Jubilee" shows artistic growth and finesse, and the new album features some of band’s finest songs yet.