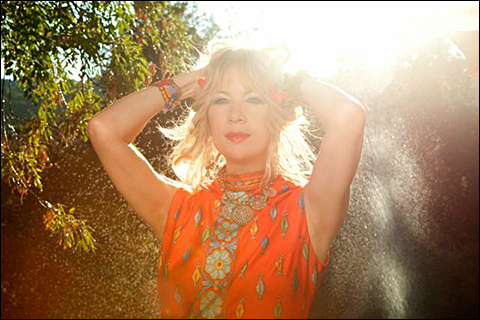 Susan James earned high praise for her 2011 release, “Highways Ghosts Hearts & Home” of which Ryan Adams, tweeted about her “great songs” and killer band. Now in 2013 Susan James returns with the lushly written and well produced "Driving Toward The Sun". Although Susan has many musical influences, DJ's familiar with the music of everyone from Lucinda Williams to Byrds, Beach Boys, Linda Ronstadt, Eagles and even Fairport Convention will hear echoes of their legacy laced throughout James' music, which sparkles with her compelling lyrics, vocals and overall sound.

Teaming up with Ryan Ulyate, producer for Tom Petty and George Harrison among others, Ulyate is just one of the many talented people who James attracts to her projects. “When Ryan and I began, we talked about how it should be as acoustic as possible, but still have a big sound. Our aim was to get the acoustic guitar to really rock like the guitars in the Rolling Stones 'Street Fighting Man', for instance… We named the sound we were attempting 'The Wall Of Intimacy’. And every song had to have it in a way, no matter how big or small the song was. I think we achieved it, and I'm proud to share it with everyone now.”

From the transitional feeling of 'Driving Toward The Sun' to the intensity of 'U-Haul In The Driveway', and 'House Of Love', listeners will be able to visualize these snapshots of a longterm relationship that has completely fallen apart. 'Anniversary' and 'Tule Fog' and 'Mission Bells' are more stripped down acoustic tracks, where listeners will sense a glimmer of hope in some of the toughest times.

James has been described by The Los Angeles Times as a “a master at exploring the emotional and sonic possibilities”, and Blurt Magazine noted, “excellent songwriting and an eye for musical details”. On "Driving Towards The Sun", she affirms the praise with insightful and big-picture stories. An adept and seasoned performer, Susan opened for both Lindsey Buckingham and Bob Weir throughout their respective six-week national tours and also supported acts from Richard Thompson, Son Volt, Rufus Wainright to Daniel Lanois just to name a few. She is currently booking tours for 2013.