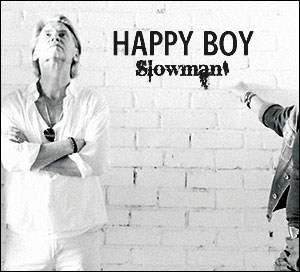 After two praised albums, Slowman releases an awaited 3rd album with original compositions in English. But Svante Törngren – the guitarist, composer and singer behind the alias Slowman – is chastened:

"I’m not expecting to a herd of journalists and TV producers. I just want to reach out to my audience with songs and compositions that I really like myself".

The desire to find a voice of his own has characterized Svante Törngren's musical career ever since he, almost 30 years ago, left a contract and the music industry in anger over meddlesome producers. He didn’t return until new technology made it possible for unsigned musicians and composers to call more of the shots in production. With the new album he has outdone himself:

"This is the best I’ve ever done. Finally it sounds close enough to what I heard in my head when I wrote the songs".

But fans and critics who favour heavy riff-based classic rock-blues may be slightly disappointed – among the 12 tracks on the new album, only a few qualify into that category. On the other hand, there are many other elements to enjoy. The skilful Mats Lundström on keyboards and John Ahlin's horn and string arrangements highlighting soloists like Anna Dager on cello, Jonas Wall on saxophone and Jonas Lindeborg on trumpet. Additionally, several tracks have been supplemented with a joyous gospel choir led by Camilla Stenman. Throughout the album, bassist Jan Enegård and drummer Stefan Rosén provide a steady groove and rhythmic accents.

Slowman himself has supervised all the details and produced the entire album:

"Some of the songs are torn straight out of my heart and it took me 4 years and a network of awesome musicians to put the bigger picture together. Now I'm incredibly proud of the result, even if the album gives me more expenditures than revenues. The real gain is on an entirely different level".