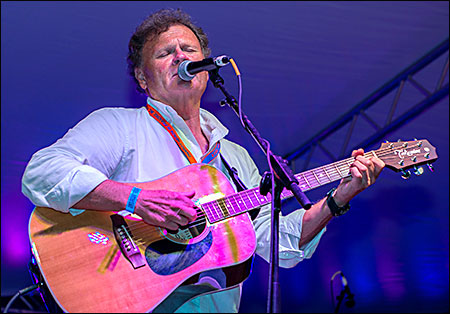 As Scott Kirby prepares to release his 8th CD, ”Chasing Hemingway’s Ghost”, he continues to perform over 100 shows each year, across North America, as well as taking the stage at his own club in Key West, when taking a break from touring. Kirby joined friends in 2012 to open the Smokin’ Tuna Saloon, a 200 seat music club best known for hosting the Key West Songwriters’ Festival, the largest songwriters’ festival in the world.

A creative lyricist and accomplished finger style guitarist with an expressive voice, Kirby describes himself as a direct descendent of the 70’s folk rock singer songwriter movement. In fact in 2009, Kirby was lucky enough to record his 6th album with veteran session players Leland Sklar, Dean Parks and Russ Kunkel, a trio that played on many of the iconic albums of that era. Kunkel also produced Kirby's ”Row Me Home” and co-wrote 4 of the songs on the CD.

In 2013 he turned to Lew London to record his 7th project, ”Sol Searching”. London, a superb multi instrumentalist, engineer and producer, with deep roots in the 70’s with his own singing songwriting career, and as a longtime musical partner with the legendary Steve Goodman.

For Kirby’s latest project, ”Chasing Hemingway's Ghost”, he sought out another multi talented singer songwriter, engineer and producer, Andy Thompson of Nashville. Andy and equally talented brother Matt Thompson played nearly every instrument on the recording and collaborated with Kirby on the title song and another track. “I’ve known Matt and Andy since 2000, and have always loved their songwriting and their musicianship, and their live shows are just phenomenal”, says Kirby. ”We wanted to record and write together for a while, and this year the stars lined up and we were able to do both”.

Kirby’s music began appearing in the rotation of Sirius XM Radio Margaritaville when his wistful ballad “Lucky Enough” struck a chord with listeners in 2005, which exposed his music to more markets around the US and Canada. He continues to receive regular airplay on the station. His ”Row Me Home” CD also received widespread airplay in the UK and Europe.

Over the years Kirby has shared the stage with many of his favorite artists, Carole King, Jimmy Buffett, Mac McAnally, Livingston Taylor, Darius Rucker, Tom Rush and Peter Mayer. He and Mayer continue to tour annually with the Mayer Kirby Mayer Acoustic Group. They released their own live CD, ”La Casa Cayo Hueso”, in 2015.

Born and raised in New Hampshire, Scott Kirby now lives in Maine and Montana, when not on the road.