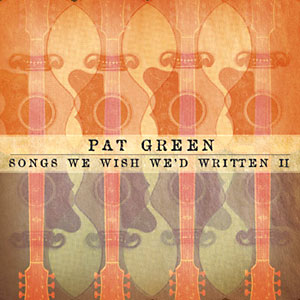 Nearly a decade after releasing the first tribute-collaboration with Morrow, Green has sold over 2 million albums, earned three Grammy nominations, released a string of Top 10 hits and created a well-earned reputation for bombastic live shows. Tapped in People magazine as “the Springsteen of the South West,” he has become a cultural force selling out venues from House of Blues in Los Angeles to Nokia Theater in Time Square, down to the Houston Astrodome in Texas.

Known for his infectious enthusiasm for music and life, Green’s energy is contagious and sends a charge through a live audience. That energy has been captured once again on record with his new album "SONGS WE WISH WE’D WRITTEN II".

“We hope our fans enjoy listening to it as much as we enjoyed recording it”, said Green, who recorded the album with his longtime road band in Texas. “You’ll hear a few songs you already know and may notice others that are unfamiliar; which was by design. I enjoy spreading the word about great talents and great music”.

The album gives Green opportunity to pay tribute to a wide range of writers from Texas troubadours Joe Ely, Lyle Lovett, Walt Wilkins, Will Alan Sexton and Todd Snider, to some of Nashville’s finest including Will Kimbrough and Jon Randall. It gives Green a chance to interpret some of his favorites written by well known artists such as Tom Petty, Shelby Lynne, Ross Childress and Ed Roland. It also shines a light on music from hitmakers Glen Ballard and Liz Rose along with up-and-coming talent Aaron Lee Tasjan.

Green’s diverse musical palate was developed at an early age surrounded by a blended family of nine children. “In a home with that many kids I listened to a little bit of everything from country and 80's music, to the best of Motown and Classical”, said Green. “I’m just a fan of music, period. I’m beyond lucky to do what I do for a living and thankful I get to record songs that I love”.

Delivered with his signature “let the good times roll” attitude and guy-next-door charm, "SONGS WE WISH WE’D WRITTEN II" is a collection of ten songs that fans are sure to enjoy. Green is currently writing new material for his next album and will head into the studio early next year to record.