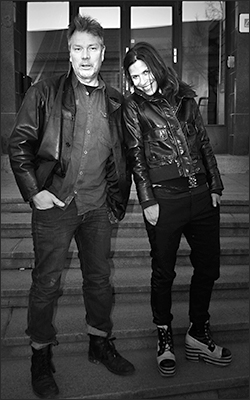 "Time For Football" is, of course, a football song, but most of all it is a song about dreams and companion­ship. We need each other in this world, as we need each other in a team. No matter if it's at the school yard or at the Wembley stadium, in family or in the neighbourhood. I need you. You need me. And that's the truth also when it comes to the challenges of the future for humanity.

The song is written by the Swedish singer-songwriter Markus Berjlund who performs it together with Caroline af Ugglas. Andreas Ahlenius is the producer-engineer and among the musicians you hear Marty Wilson-Piper.

During his life Markus has been listening a lot to musical giants like Dylan, Springsteen and Neil Young. In "Time For Football", you can also hear musical influences from British post-punk bands like New Order and The Smiths.

Caroline af Ugglas is well known in Sweden for her intense and emotive voice and her charismatic stage appearances. She has made 7 albums and also made many TV appearances in different con­texts. Her album "Så Gör Jag Det Igen" (2009) reached the number one position of the Swedish album list.

Markus Berjlund has made 3 solo albums. In 2010 he had his first song added on the playlist of the dominating Swedish radio channel, Radio P4. His music has also been played in other Scandinavian countries. But he had never even thought of writing a song in English when one morning - when the Swedish version of this song was completed - the phrase “it takes a team to fullfil a dream” came into his head. One hour later he had completed the lyrics of "Time For Football" with words focusing what mankind has in common, all over the world. Football as a metaphor for important aspects of life itself. But it is also a tribute to some of the greatest practitioners ever of the sport; Puskas, Pelé, Maradona, Gascoigne, Beckenbauer and Cruyff.

Marty Wilson-Piper is to many music lovers most known as a guitarist in the legendary Australian group The Church. As in their major hit "The Unguarded Moment", Marty here brings sober guitars with a driving force.

Andreas Ahlenius has produced gold and platinum albums with Saybia (DK) and produced and/or mixed some of the most prominent Swedish artists like Miss Li and Di Leva.