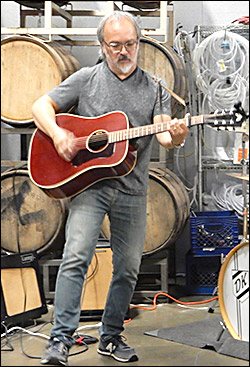 Mario Rojas is a singer songwriter from Los Angeles, CA. As a teenager he spent a few years living in Dallas, TX, where he was able to get into clubs and absorb some of the local music scene seeing such diverse acts as Freddie King and Ray Wiley Hubbard to name a few. He learned a lot living there, and has been banging on the guitar since he was a kid. Has a major in FM and a minor in AM radio. It’s all about the songs for him.

In LA around 1977 to the early 1980's he spent a few years writing, singing and playing guitar in the Shake Shakes, a pop punk new wave band who were on the cusp of making it. After that he took some time off to help raise his kids. Now he's back and has more to say. His songs reflect all the good parts of AM radio, from back when you could hear everything from the Stones to the Supremes, Dylan to Beach Boys, LA's 70's singer songwriter country rock to punk on FM. Listening to just about every type of music opens your eyes and ears and all of those influences show up.