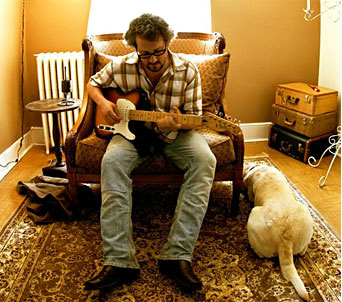 In the Spring of 2006, a seven-year email correspondence culminated in the meeting of Luke Jackson and Magnus Börjeson. Luke had long been a devoted fan of two of the Swedish musician’s former bands: Beagle and Favorita, and the two songwriters finally met in Paris where Magnus was mid-tour playing in The Cardigans. By the end of the weekend they were like old friends and Luke had accepted an invitation to Sweden for the upcoming Midsummer long weekend holiday. These celebrations were taking place in the countryside outside Malmö at the Aerosol Grey Machine - the stunning all-analogue recording studio of Christoffer Lundquist, producer and multi-instrumentalist extraordinaire, former member of Roxette and founding member of Brainpool, another of Luke’s favourite bands.

The Midsummer weekend was a magical time filled with wonderful people, beautiful weather, great music, fantastic food and free-flowing booze of the highest quality. As Luke boarded his flight back to London in a Schnapps-induced fog, he considered the invitation to “come back and record any time”. It had been six years since the release of his self-produced second album “Momentum”, and Luke knew that the songs currently springing from his right hemisphere were the best he’d ever written.

“Why not make an album with my favourite musicians on the planet?” he mused.

And so Luke returned to Sweden in January 2008 and set to work in the studio with Magnus on bass and Christoffer’s Brainpool bandmate Jens Jansson on drums. The four musicians worked quickly and spontaneously to capture half a dozen songs, including “Come Tomorrow” which Luke had begun writing the day before leaving for Sweden. Luke returned to London buzzing with excitement. Not one to manifest small, he sent the rough mixes of the songs to renowned London-based string arranger Robert Kirby (Nick Drake, Elvis Costello, John Cale etc). To Luke’s delight and surprise, Kirby loved the songs and offered to write orchestrations for the album and accompany Luke to Sweden to conduct the necessary recording sessions with nine players from Malmö’s Opera Orchestra.

Luke had managed to bring together two of his most beloved musical worlds: the pop sensibilities of his friends in Sweden, and the distinctive eloquence of Robert Kirby’s string arrangements. It is the collision of these two worlds which makes “...And Then Some” so compelling. Densely layered guitars and vocal harmonies fuse with sweeping string lines, none of which ever draw the ear too far from what lies at the heart of Luke’s music...gorgeous, expressive, unpretentious songs born of the trials and tribulations of a life lived to the fullest.

"...And Then Some" also comes in an audiophile LP edition, half-speed mastered by the legendary Stan Ricker (Joe’s Garage, Brothers In Arms, and the mobile fidelity edition of Dark Side Of The Moon), pressed on 180-gram vinyl in a beautiful gatefold sleeve.