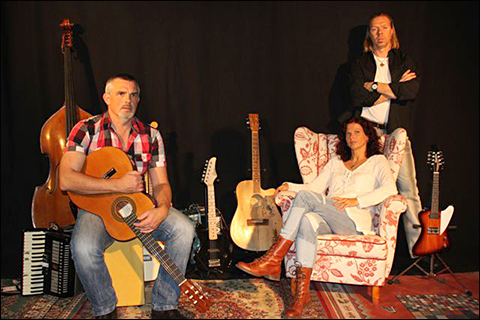 "He tucked the instrument under his chin, raised his bow and waited. His eyes were staring at the beautiful ceiling painting. After a short moment of silence, the music started to flow into his ears. The resonance of the violin filled the empty space with its stunning sound…"

This was the start of Loveflowers second album and the song was “Like A Brick Of Stone”. New studio, new challenges and a new sound merged into Loveflowers world of music.

The debut album had its roots in alt country, folk and pop music. The same natural blend is in the second album. All songs have their own identity, and character, but Loveflowers' soul permeates the entire production. You can still hear the acoustic sound from the first album present, but now embedded in an electrical world.

“We felt we produced a special sound when we wrote 'Shepherd Of Soul' says Michael. Influences and experiences from various styles of music created the song within 30 minutes. The step was not far to the next song "Children Eyes", which received an acoustic sound, due to the guitar figure. “I knew immediately that it would not work with an electric guitar”, says Leif.

“We knew after the first album that we wanted to increase the intensity in the songs. It was not obvious at first, but we found the content, structure and sound of many of the song ideas that were composed from start", says Michael.

"In an ideal world, the listener will feel equally involved, as we do, in the music and lyrics. We are proud of our achievements and feel that this album has developed Loveflowers, and taken the music to another level."