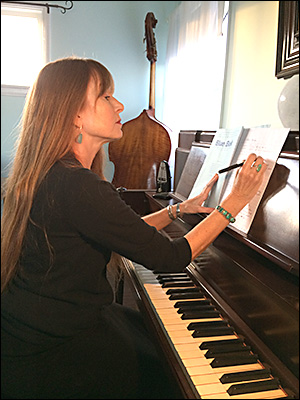 Lisa Mednick Powell is a musician and songwriter who resides in 29 Palms, CA, close to Joshua Tree, with her husband and bassist extraordinaire, Kip Powell. Together they have a band called Arroyo Rogers, which plays country hits from the 60’s and 70’s, along with songs penned by the Powells. As a keyboard player she has worked on stages and in studios from New York to New Orleans, and from Austin to Auckland. She has worked with too many artists to mention, known and unknown. Some highlights for Lisa were working with Earl King, Alejandro Escovedo, Ray Wylie Hubbard, James McMurtry, The Chills, and Juliana Hatfield, just to name a few. Playing original music, both hers and that of others, is her strength. She has an uncanny ability to find just the right part for ’your’ songs. While living in New Orleans she was part of the popular rock and roll ensemble, The Song Dogs. They have recently reunited to record an album of fresh songs.

Lisa Mednick Powell has a new album out after quite a long hiatus. The album is called ”Blue Book”. Her previous albums, ”Artifacts Of Love” and ”Semaphore” were critically well received, and ”Blue Book” is a logical follow up to those albums. Lisa's artistic concepts and themes have remained consistent throughout all of her works.

Fred Mills, of Blurt Magazine, writes: "’Blue Book’ is Powell’s 3rd album, and considering it’s been nearly 16 years since her previous album, 2002’s acclaimed ’Semaphore’, the obvious question becomes, why the delay? Part of the reason is that she was busy getting a master’s degree, but really, the answer resides in these 10 remarkable tunes. She was taking the time to live her life, learn its many lessons, and turn those experiences into songwriting gold".

In Stereo Embers, Dave Cantrell writes, "Similar to the Band’s mythic epiphanies or the sand mandalas of Tibetan monks, the songs on ’Blue Book’ seem held in this sort of tension of timelessness that makes them feel both fleeting and stamped forever on your music listening heart. It’s not a trick, there’s no sleight of anything going on, they convince you of that from the very start. It’s just how they arrive, as if they’re fully formed souls aware of their own mortality".

Because Lisa wants the music to convey the emotion as much as the lyrics do, every song is a mini soundtrack that swirls around dark and truthful lyrics.

Lisa Mednick Powell writes songs that take you on a winding road straight to the heart of the matter. Her voice is unadorned, but it suits the songs, and her profound poetry is drenched in evocative layers of sound that wrap around her sinuous lyrics and give them credence.