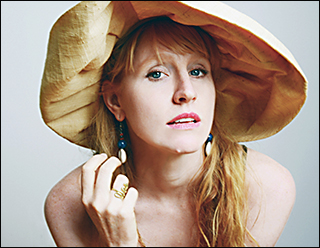 Lesley Kernochan is an americana singer songwriter with occasional bursts of comedy, swing, pop, and jazzy mouth trumpet. Within each unique song Lesley's versatile voice brings music to life that is intelligent, achingly beautiful, and playfully surreal. In Lesley's new album A Calm Sun, she settles into a tender country/folk sound that "casts her in a place delicately between the soundscape of Kacey Musgraves and Norah Jones—studied and soft-spoken, yet rollicking. [PopMatters]."

Lesley has an eclectic background as a saxophonist, contemporary composer, operatically trained coloratura, musical saw player, and now singer songwriter. She has 4 albums of original music including the acappella creation ”Undulating”, her indie rock pop jazz sensation ”The Pickle Jar”, the Parent's Choice Gold Award winning children’s album ”A Day In The Life Of A Boogaleeboo”, and her most recent americana record ”A Calm Sun”.

Lesley is being represented in Germany, Austria and Switzerland by Make My Day Records, and independently under her own label Maple Syrup Music in all other areas.