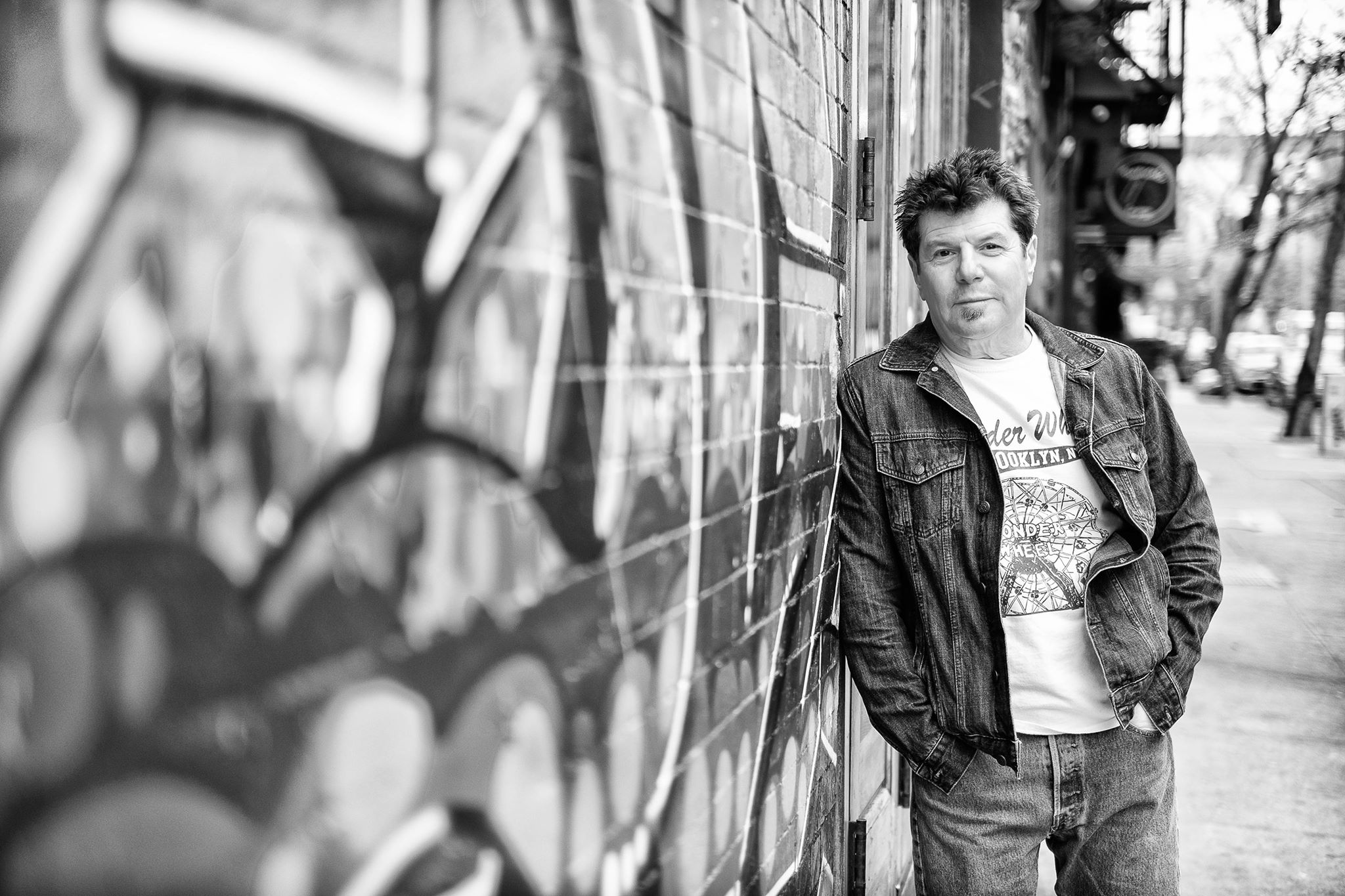 On Jono Manson’s latest album, "Silver Moon", the swaggering “Face The Music” captures a sweet, formative vignette. In the song, Jono and his childhood buddies are pantomiming to the hits of the day, posing out and pretending to sign autographs like The Beatles when his mom suddenly crashes the fantasy, pleading for Jono to come to dinner. The adoring fantasy fans will have to wait until the morning.

In a career that spans over 5 decades, beginning with his 1st all original band in 1968, formed with those same adolescent rock'n'roll play pals, Jono may have not scaled the heights of The Fab Four, but his legacy is assured.

The singer, songwriter, producer, and tastemaker has become something of a roots rock icon. Back in the 1980's and 1990's, he was the godfather of New York City’s famed Nightingale Bar scene, the venue that kickstarted the careers of Blues Traveler, Spin Doctors and Joan Osborne, among others.

His 10th solo album, "Silver Moon", brims with the exuberant musicality of someone whose fire burns bright after many lifetimes in the music industry. The 13 song album is unmistakably Jono, winding through reflective americana, gritty r'n'b, raunchy rock'n'roll, and elements of pop, like a night of music at Nightingale. It’s an invigorating album from an artist who helped define an era, and it features superstar friends such as Warren Haynes, Joan Osborne, Eric Schenkman, and many more.

“This is an amalgam of the life and music that has defined me. In a way, I feel like I’ve come full circle, but also I feel like I’m just hitting my stride”, notes Jono. “These songs are some of the strongest of my career, so far”.

Jono will always be associated with New York City, even though he’s lived in Santa Fe, New Mexico, since 1992. His time out West has expanded his artistic palette, enriching his aesthetic with an earthy americana quality that subtly courses through "Silver Moon".

His story spans rocking dive bars in gritty New York City 1970's to hitting that pinnacle of performing at Madison Square Garden. Between these book ends, Jono has played countless iconic venues and bars, house concerts, and festival stages, and he’s become an in demand producer, sideman, and songwriter.

As a solo artist, a songwriter, and a producer, Jono has amassed an impressive discography that includes major label and indie label releases. His songs have been recorded by Grammy winners and have been featured in major motion pictures, on network television, and in national advertising campaigns.

He remains vital as ever today, collaborating with an eclectic roster of international artists from superstars to local heroes, American Idol finalists and folksingers, Italian pop stars and Pakistani sufi rockers. He’s most active working out of his Kitchen Sink recording studio located in Santa Fe, New Mexico, where he has 4 times been named 'Producer Of The Year' by the New Mexico Music Awards.

Jono 1st made a seismic impact in 1980 with The Worms, a 6 piece party band that seamlessly melded jump blues, funk, rockabilly, country, and r'n'b. This became the soundtrack to early 1980's thru early 1990's underground New York as The Worms began to epitomize an eclectic collective that spawned a generation of artists who would be deemed modern jam band icons. Jono was at the epicenter of it all, as something of a benevolent figurehead who always had time to advise and help out the up and coming artists.

Though he would go onto pitch his tent in northern New Mexico at the height of the New York City scene’s halcyon era, Jono’s impact would live on as the bands he mentored raced up the charts. Throughout it all, Jono has remained friends with the class of 1991, and to this day continues to collaborate with many of these musicians. For example, Jono produced and co-wrote John Popper’s 2011 critically acclaimed album "John Popper & The Duskray Troubadours".

Jono has been so busy nurturing the career of others that he’s hasn’t always had time to pursue his own muse. For "Silver Moon", he carved out time in his hectic schedule to write and record what has become a milestone record for the cult musician.

"Silver Moon" is a vibrant mix of the reflective and the raucous that somehow manages to encapsulate the life of times of Jono. “It wasn’t a conscious thing, I didn’t set out to make this statement, everything, including the guests, happened organically”, he shares. The songs are all penned by Manson, a handful written along with several of his long-time collaborators.

Besides the marquee names who guest on the album including Haynes, Osborne, Schenkman, James Maddock, Eric Ambel, Eric McFadden, Terry Allen and Eliza Gilkyson, musos will dig deep into the credits to see all the superstar sidemen associated with the recording.

The album’s overarching theme of a silver moon is a byproduct of self reflection that comes later in life. A silver moon slowly fades away at sunrise but, even as it disappears, it remains present, unseen. The imagery here is rife with mortality. “I’m 59, and I feel vital and great, but I have these thoughts about what’s next. I think everyone does at a certain age”, Jono says. “A lot of songs on this album in passing, or in a deeper way, explore life and death and what happens or doesn’t happen after you die”.

The album opens with the folky road lament “Home Again To You”, with David Berkeley, setting the tone, and the sweet vulnerability that winds its way through the record. The title track boasts some of the album’s most poetic lyrics. Here, masterfully accompanied by Jason Crosby’s Hammond B3 and Warren Haynes’ teardrop slide guitar playing, Jono sings, "Like the moving clouds, Or the majesty of gravity, She pulls the tides, In ways we cannot see, Like departed souls, Who may show their face, At unlikely times, In a surprising place, So if you’re looking out, Underneath a pale blue sky, Like the morning moon, Sometimes they shine".

Haynes comments, “'Silver Moon' is a beautiful song. Playing on the recording reminded me of late nights playing together at The Wetlands back in the 90’s”. Those cigarettes and booze fueled Nightingale nights are revisited on “Loved Me Into Loving Again, featuring Joan Osborne. The braying sax, laidback, retro soul groove, and Joan Osborne’s honeyed rasp duetting with Jono’s breezy vocals conjure those carefree days of bar band bravado.

Mid album there is an accidental self declamatory trilogy featuring, “I Have A Heart”, “I Believe” and “I'm A Pig”. “All of those things apply to me”, Jono laughs about the trifecta. Other highlights include the ominously bluesy “Shooter", featuring Paolo Bonfanti, which unflinchingly tackles the spate of school shootings by directly addressing the perpetrator, and the playfully titled “The Christian Thing”, featuring Terry Allen and Eliza Gilkyson, which Manson calls 'a folk gospel tune for complicated times' that explores “reclaiming an ethical and compassionate stance at a time when basic moral tenets of faith have been usurped by haters”.

Another standout is the aforementioned “Face The Music”. The strutting anthem might be the most potent distillation of Jono’s life and career. Reflecting on it all, he says, “I still feel like this kid who just loves to play rock'n'roll. Though I’m still in the trenches, and I’ve never been a rock star, I feel so lucky to continue to have this multifaceted career”.