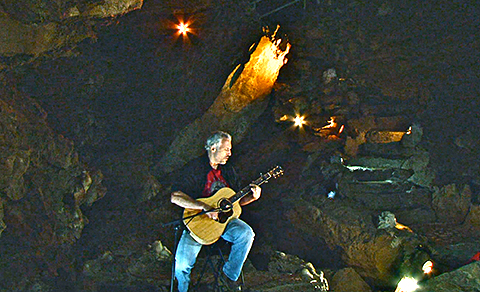 "During the summer of 2010, I received an invitation from my friend, Greg Fredrick, to compose music for a documentary he was producing on the Oregon Caves. I happily agreed to take on the project while assuming I would compose this music in my home studio to previously assembled documentary footage. Shortly after I took on the project, I was presented with the exciting and unique opportunity to record my acoustic guitars in the Oregon Caves themselves!

I purposely decided not to prepare anything for this event prior to the recording. I had a premonition that playing my guitar in such a sacred space would strongly influence my improvisations and evoke unique creativity. I decided to bring 2 acoustic instruments for the recording session in the caves, a 6 string acoustic guitar and an 8 string mandocello.

On the afternoon of Oct 6th, 2010, in the largest open cavern in the caves, called the Ghost Room, 12 compositions were spontaneously conceived, one after the other. I performed one take on each piece, without any idea of how the music would begin or unfold.

The caves were chilly and damp, yet deeply calm and serene, as if time were standing still. Condensation dripped from the rock walls, which you can hear during quiet moments of the recordings. As I had previously hoped and imagined, the decision to improvise while in the caves had a profound impact on the compositions.

After the staff at the Oregon Caves National Monument heard what I had recorded, they inquired if I would consider releasing this music as a CD of its own. The concept of turning these improvisations into complete arrangements, much less a debut release, wasn't at all a consideration previously. I assumed that only excerpts of this guitar music would be used to support the PBS documentary, 'The Marble Halls Of Oregon'.

To my surprise and delight, a lifelong quest was realized. Up until this time, the daunting task of deciding what music might possibly be included on a debut project of my own had eluded me. Now in one fateful, fruitful three-hour visit to the Oregon Caves, this wish had been visualized, crystallized and documented.

Rather than release this debut as a solo guitar record only, I chose to add more sonic diversity, color, and intensity to the songs by taking the 12 original performances back to my home studio and overdub additional instruments to the tracks recorded in the caves. In an effort to keep the music as organic as possible, I avoided using any electric instruments. While most of the instruments heard on these songs are overdubbed performances of my own, as the project evolved, I was imagining some other sonic textures, so I decided to invite a number of special guests to add their unique flavor on selected songs.

On a whim, I sent the song 'River Of Dreams' to one of my favorite vocalists and composers, Jon Anderson, best known from his work with the band Yes. To my delight, Jon wrote the lyrics and sent back a recording of his vocals only a few hours later, with a heartfelt letter telling me how much he enjoyed this music and this opportunity to collaborate.

I am humbled by all of this. I thank all involved for the wondrous gifts of their participation. I offer this music out, from within. It has given me a faith that more is available to us than we could ever imagine, if we trust to call on it. From The Core ~ Jeff Pevar