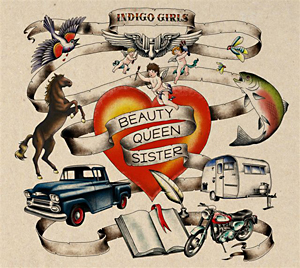 Grammy-winning folk-rock duo Indigo Girls will release their 14th studio album, 'Beauty Queen Sister', October 4th, 2011. The new album is a stunning 13-song collection featuring the signature storytelling that fans have grown to love, touching on modern-world worries and romanticizing the simplicity of days gone by. Recorded in Nashville, the duo reunited with producer Peter Collins, with whom the Indigo Girls worked on 1992’s 'Rites Of Passage' and 1994’s 'Swamp Ophelia'. 'Beauty Queen Sister' will be the 4th album released on their own IG Recordings through Vanguard Records.

The record’s stellar guest musicians are essential to shaping the sound throughout 'Beauty Queen Sister', according to Amy Ray and Emily Saliers. “Many of our players are top-notch Nashville talent — You just don’t get any better than that”, Saliers says. Noting the dynamic drumming style of Brady Blade and the smooth bass grooves of Frank Swart and Viktor Krauss, Saliers adds that the high-energy ensemble of featured artists played a key role in carrying out the “organic approach we wanted to take on this album”.

“War Rugs”, a song about the 2011 Egyptian revolution, features guest vocals from singer-songwriter Lucy Wainwright Roche, while the love song “We Get To Feel It All” features honey-tinged backup vocals by The Shadowboxers (an Atlanta-based band). On the subdued yet sultry “Share The Moon”, Jim Brock provides rumbling percussion, while Carol Issacs lends her delicate piano sounds to “Birthday Song”. “Damo” owes its sprightly Celtic sound to Eamonn de Barra’s whistles and flute and to the full-throated backing vocals of Irish singer-songwriter Damien Dempsey. The spellbinding slow-burner “Yoke”, centerpieced by hauntingly urgent strings from violinist Luke Bulla, makes for a masterful closing track.

The Indigo Girls’ constant touring, as well as staunch dedication to a number of social and environmental causes, has earned them a fervidly devoted following over the years. So many artists who launched their careers in the late 80's have slipped from our collective memory, yet the Indigo Girls continue to sing night after night to multi-generational audiences who flock to their shows and give themselves over to the power of their music.