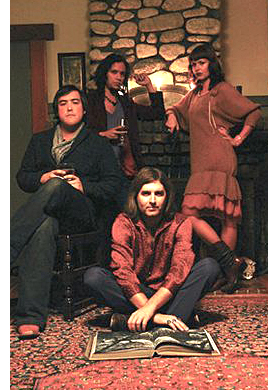 LA-based Heavy Water Experiments passionately resists the tendency of modern bands to revive sounds of bygone eras. While admittedly taking influence from 60’s and 70’s genres such as psychedelic and progressive rock, this is a group who strives to break new ground according to an avant-garde or art rock sensibility. One of the ways HWE achieves this is through unique instrumentation, such as the use of an 8-string bass along with a regular 4-string bass, keyboards, and drums. However, the band never relies on this approach as a marketing gimmick since it also incorporates electric and acoustic guitars in the usual way.

The sound of the band is eclectic and can range from a dark, heavy quality to a mellower, acoustic-oriented vibe. Certain tracks might seem to fit well in the stoner rock category, for example, while others could be deemed indie rock or some other current genre. In the past, the band has used marriage characterizations such as “Pink Sabbath,“ “Doorphine,” and “Radio Queens of the Stone Head.” These are intended to underscore the notion that HWE neither sounds like one particular band nor like any specific combination of bands. Accordingly, HWE has been compared to a vast number of past-to-present artists, and yet there has never been a tendency toward one or even a few in particular.

So far, HWE has enjoyed a laudable degree of progress while still remaining independent. To date, the band has toured the US and the UK (twice) as well as performing a handful of shows in Holland and Belgium. Locally, the band has played a wide range of venues from Spaceland, The House of Blues, and The Viper Room to more acoustic-oriented venues like The Hotel Café, which culminated in being chosen as one of Amoeba Records’ local picks. The band’s newly released debut album has received enthusiastic reviews internationally, and the album has been accumulating steady international momentum through underground radio airplay and live interviews from DJ’s in the US, UK, Europe, and Australia. Tracks from the album have also appeared on popular American TV shows such as 'Friday Night Lights', and the band’s promo poster appeared on various sets for an entire season of 'The O.C.'. The band has also self-organized two underground music festivals in the neighboring Mojave Desert with many notable LA bands performing.

The band is fronted by singer, songwriter, guitarist, keyboardist, bassist, and producer David Melbye — an LA native whose past bands/projects include Ludivine. Fuzz Beloved, and Zanzibar. His creative/artistic partner Roberto Salguero, originally from El Salvador, plays drums and percussion. Also joining the live ensemble are Rebecca Black on keyboards/vocals and Rick Staggs on bass.