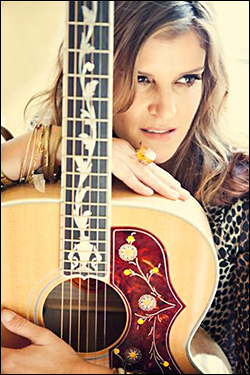 Heather Stewart is a singer-songwriter who you’d expect to see on a festival bill with Bonnie Raitt, Brandi Carlile and Sheryl Crow. She sees life the same way she writes and sings about – grounded and for what it is. She takes the good with the bad, and appreciates the beauty of both and the space in between. She sings with range, power and emotion, but it’s Heather’s down-to-earth realness that makes her so easily lovable and relatable. Heather now prepares to independently release her sophomore full-length album, "What It Is", on May 27th, 2014.

Heather Stewart is the conscious and connected music lover’s triple threat. It starts with her enchanting nature; she speaks from the heart and every song or live performance feels like a genuine conversation. “I want people to walk away feeling as if they just had a lovely, intimate dinner with me”, she says. “Where we discussed life, love and sex, drank wine and laughed a lot”.

It then flows to her fiery and courageous spirit, acquired from years of battling her own fears and insecurities about stepping into the spotlight. As a former television producer for E!’s 'Talk Soup', Heather was a pro when it came to working behind the scenes, but something about it just didn’t feel right. “Every time I did a sketch on camera for 'Talk Soup', (because all the actors were “in-house”, i.e. “free”), I would say to myself, ‘This is what I need to be doing”. Heather’s curiosity and lifelong desire to be in front of the camera eventually beat out her otherwise awesome, cushy job and she quit, making music and acting her career. She now stands as a powerful female role model, encouraging other women to be who they are and to be as big and powerful as they want to be, no matter how long it takes nor where they are in their lives.

Additionally, Heather proves she’s a force to be reckoned with because, quite simply stated, she can rock out. She also connects with people emotionally, and gets them to sing and move their bodies. “I want to laugh, cry and feel inspired with my audience”, she says. “If people walk away having been moved in some way or another, I’ve done my job”.

After her TV production resignation, Heather Stewart traveled a solid road before becoming one of Fresno, CA’s born and raised claims to fame. She toured with the Inda Eaton Band as a background vocalist, opening for Hootie & the Blowfish, LeAnn Rimes, John Hiatt and Blues Traveler. She gained some invaluable knowledge on that tour, like how to empty the sewage from the band “moho” (motor home) and that performing is not just about getting the notes right, but about connecting to the audience and taking them on the ride with you.

Heather also wrote and performed a popular one-woman cabaret show, lent her voice to a track alongside Julie Andrews in “The Great American Mousical”, and currently also works as an actor in her home of Los Angeles, CA. In 2008, Heather independently released her debut album "Life Of The Party". Since then her music has been heard on television shows ('Men In Trees') and films ('Young, Single & Angry'), and she recently won the Malibu Music Award for her song “If I Can’t Take You With Me”.

Heather’s brand new album, "What It Is", was produced by Greg Critchley and mastered by Robert Vosgien at Capital Studios. “Greg Critchley and I wanted a very raw and organic vibe for this album, which is why we chose to record everything ‘live off the floor”, she says. With a group of stellar musicians, all of whom have done session work for notable artists including kd lang, Fiona Apple, Ryan Adams, Lucinda Williams and John Mayer, that goal was achieved. Joining Stewart on "What It Is" are guitarists Blake Mills, Marty Rifkin and Joshua Grange, as well as bassist Sean Hurley and drummer Aaron Sterling.

"What It Is" was written mostly after the death of Heather’s father. “Music to me serves such a dual purpose, emotional catharsis and escape”, she says. “I wanted these songs to capture the rush and multitude of what I was experiencing, from ‘Life is so f***ing short so I better make my mark’, to ‘What the hell is this all about’, to ‘Oh yeah, love'!”. The album certainly takes the listener on this journey with tracks like “Had It All”, addressing how life goes by in the blink of an eye, and “A Little More”, exploring the idea of wanting more time to say “I love you” and “I’m sorry”. Her song “Stand Up” offers an anthem of encouragement, written as a call to action for women to stand up, be seen, be heard and be respected.

The album’s title track reminds us to lead with love, and offers an overall perspective that’s genuine and calming to the collection’s otherwise heavy topics. “What It Is” came about from a dinner Heather had with her husband, who had ordered a dish that was out of the ordinary for him. She asked how it was and he responded, “Well, once you get over what it isn’t, what it is, is pretty good”. The poignancy of his answer inspired her. “That can apply to almost anything in life”, she says.” We have all these expectations we put on our friendships, careers, love and ourselves. If we can let go of all of that and appreciate what it is, that is the key to it all”.

Heather Stewart is obsessed with exploring and figuring out the human condition, which likely contributes to her stellar songwriting and acting. But music and acting aren’t the only ways that Heather finds escape; she is a definite travel fiend. “Travel is a great way to appreciate what you have and don’t have, and to experience the surprise and elation of never knowing what to expect or whom you might talk to”. She’s traveled to 29 countries and counting, including a climb to the top of Mt Kilimanjaro. “From up there at 19,000 feet you can actually see the curvature of the earth. That sort of tends to put things into perspective”.

It’s that same adventurous and curious spirit that brought Heather into two legendary recording studios to make "What It Is". The album was recorded in two phases, first at the Sound Factory and the second at Sunset Sound, both in Los Angeles. “You cannot help but be overwhelmed by the history and vibe of these studios. It’s the real deal”, says Heather. “I wanted to record some place where I could soak up the magic of music legends. You become a little better and are challenged to be better, just by being there”.