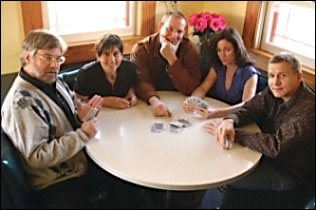 When FingerPistol isn't playing the Nugget in Vegas they're out cruising the back roads of the Texas Hill Country looking for roadkill that's still tender enough to barbecue. They also drink a lot of tequila and go through a staggering amount of limes, enough to give you mouth sores just considering it. Yes, they’re a little bit older than your average bar band, but what they lack in youth and beauty, they make up for in enthusiasm and gratitude, just like an ugly cheerleader or a stray dog.

Musically speaking, is there room for improvement? Of course there is. FingerPistol won’t blow you away with jaw dropping guitar pyrotechnics, flashy drum solos or complicated orchestral arrangements, they won’t set their instruments on fire, play guitar behind their backs or do flying, acrobatic stage dives into sweaty, teeming mosh pits (mosh pits?), but they will play some fun music, sing some nice harmonies, and keep your toes tapping, or maybe your boots scootin’ if that’s the way you swing.

Singer-songwriter Dan Hardick and girl singer Suzee Brooks (aka “Hondo” and “Teensy”) started out harmonizing at family campfires which led to harder stuff. Karaoke bars, open mics, hootenannies, song circles, that kind of thing. Eventually, Dan asked Suzee to join the band and FingerPistol got a little girlier, just a Teensy bit. Onstage Dan and Suzee are irrepressible raconteurs, occasional fabulists, and their own worst critics, why not? It’s something they’re good at. So maybe they’re not Conway and Loretta, George and Tammy, or Gram and Emmylou, but give them credit for sticking it out well beyond their expiration date, for continuing to navigate the treacherous gauntlet of the music business with a sense of adventure and optimism, and for being brave enough to be 'never was' musicians who are old enough to be mistaken for has-beens. Maybe someday there will be a Grammy for that, but don’t hold your breath.