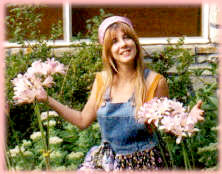 Her 1st record release was a single “The Boy With the Way” /b-side “Memory of Your Voice” on Liberty records in 1964. “Newcomer Pick” in Cashbox, it was produced by Hutch Davie (He produced Shirley Ellis “Name Game”). A year later in New York both Koppelman & Rubin and United Artists offered her a position as a staff writer. She took neither offer but Shadow Morton who produced both the Shangri-Las and Vanilla Fudge, discovered her and her music and in 1966 the Shangri-La’s recorded Essra’s song “I’ll Never Learn” . Soon after that, her song, “The Spell That Comes After” was recorded by Vanilla Fudge on their “Renaissance” album. In 1967, Essra was discovered once again. This time by Frank Zappa who, after hearing her play was so blown away, he immediately invited her to join his band, The Mothers of Invention, thus making her their first female member. Within a year he signed her and released her first solo album on Verve. While performing with the Mothers, Essra also opened for Cream (their first time in New York), Procol Harum(Keith Reid’s lyrics to “Quite Rightly So” are about Essra), Albert King, Electric Flag, Grateful Dead (their first performance in N.Y.), and Jimi Hendrix.

By 1969 Essra was recording her second album in L.A. and S.F. for Reprise after Mo Ostin (then Vice President) discovered her singing at a club in N.Y. and asked her on the spot to come to the label. The result was “Primordial Lovers”, an LP that received a 5 star review in Downbeat, raves in Mix, and was stated as being “one of the best 25 albums ever made” in Rolling Stone magazine. Unfortunately, these reviews came over a year after the release of the album and new fans found it hard to secure the LP due to poor distribution and the sale of the Reprise label following the release. Nevertheless, this critically acclaimed musical work continues to generate a cult following for Essra. In fall of 2000 it was released on CD by Rhino Handmade. She wrote most of the songs while living in Mendocino, California. While recording the album, Essra married her producer, Frazier Mohawk, and from that time on was known as Essra Mohawk. She also sang in a background vocal trio with Carole King.
Essra’s third album, released in 1974 on Elektra/Asylum, once again without proper promotion or distribution, led England’s music magazine, Melody Maker, to declare it, “the richest and most unheralded event in American music” that year.

After moving back to Philadelphia in the 70’s, Ms. Mohawk continued to sing as a session vocalist. She is especially known for singing on Schoolhouse Rock, the popular educational and musical cartoon series that continues to air on TV. Essra’s vocals are on “Interjections”, “Sufferin’ Till Suffrage”, and “Mother Necessity”. After ABC Video released the cartoons on video in the 90’s, they received an upsurge of popularity and the troupe, led by music director, Bob Dorough, began performing live in the mid-90’s. A new album on which Essra sang wrote and produced a track entitled “Do You Wanna Party” about political parties in the U.S. was released on Rhino in Sept. ‘98 on an album called “Schoolhouse Rocks the Vote”.

Ms. Mohawk’s fourth album was released on Private Stock records in 1976. After the same lack of support that has kept Essra’s remarkable music in the shadows, she left the label and moved back to California in 1977. Paul Kantner wanted her to be the lead singer in Jefferson Starship after Grace Slick dropped out for a while but he couldn’t convince the rest of the band to use another female vocalist so they chose a male, Micky Thomas, instead. In 1980-82 Essra performed as a background vocalist with the Jerry Garcia Band. During the same period she co-wrote “Haze” with Bobby Weir and his band “Bobby and the Midnights” for their Atlantic release. Also, Essra has collaborated with Al Jarreau, Bonnie Bramlett, Mark McEntee of the DiVinyls, Eric Bazilian, Al Stewart and Narada Michael Walden. She sang and recorded with John Mellencamp. (He’d seek her out wherever she lived for her advice and encouragement.)

Essra’s music and ideas inspired Joni Mitchell’s “Woodstock” (Essra was scheduled to play at the original Woodstock, but her manager missed a turn and they arrived too late. She finally played at the 25th Anniversary at Bethel.) David Crosby’s “Deja Vu” was inspired by Essra’s song “I Have Been Here Before”. David would ask her to play it for him whenever he saw her and then wrote “Deja Vu” as a result.

In 1982, Essra moved back to Philadelphia from L.A. and was brought into the McFadden & Whitehead pre-production sessions. She conjured up “Not With Me” overnight for the duo and they released it on their Capitol album that year.
Essra recorded two more solo albums in the 80’s. Both were released independently and both were produced by her, then, husband Daoud Shaw (Van Morrison’s drummer for many years and original drummer for Saturday Night Live). They first met during those early days on Bleeker St. in New York’s Greenwich Village, where she jammed vocally with jazz greats: Mike Manieri, the Brecker Bros., Eddie Gomez and Jeremy Steig. As a result her vocal style developed more along the lines of a wind instrument than that of a typical pop singer. Being in the Mothers then also helped to propel the youth to such a creative and original stance as a vocalist.

Essra’s eclectic influences begin with her parents, Anne and Henry Hurvitz, who sang and wrote 40’s style standards, and include: Judy Garland, Nina Simone, The Coasters, Frankie Lymon and the Teenagers, Little Anthony & the Imperials, Thelonius Monk, Erik Satie, Billy Holiday, Otis Redding, The Beatles, Ravi Shankar, The Rolling Stones and Ravel. Essra’s career as a songwriter took off when Cyndi Lauper recorded “Change of Heart” in 1986. It went to #3 on Billboard’s top 200 in 1987, winning an award from BMI for airplay. The album it was on (“True Colors”) went platinum. Since then many artists have recorded Essra’s songs and continue to do so. (see list below) The singer-songwriter’s over 600 songs, have recently been archived for future releases.

Three of her early LPs were reissued on CDs in Japan in spring 2003, followed by her recent tours to California, the East Coast and Japan . Essra’s first album on CD “Raindance” which was released on Schoolkids Records in ‘95 was reissued on Evidence Feb., 2005. Her 1999 CD, “Essie Mae Hawk Meets the Killer Groove Band”, was remastered and reissued on Essra’s own label, MummyPump, in 2003. Essra’s been living in Nashville, TN since 1993 where she continues to write and record, playing her music on piano, mandolin and guitar. Keb’ Mo’, Steve Cropper and Bonnie Bramlett are among the stellar performers who joined Essra on her 2003 Evidence CD “You’re Not Alone”. Her songs were used on the CBS series Joan of Arcadia in 2004 and 2005. The new book, “Hotel California” is one of many books about music that mention Essra.