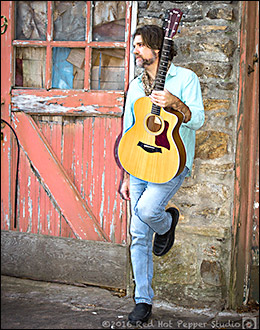 2018 finds Eric Congdon further cementing his reputation as one of Western North Carolina’s most talented artists. From mind blowing live performances and ground breaking music video projects, to his ongoing charitable efforts supporting Autism, Eric always brings an energy and creativity to any project he is involved with. His latest album, ”Into The Woods” has earned high praise for its stunning mix of heartfelt songs mixed with blazing instrumentals.

His live show is a bouillabaisse of influences, ideas, and improvisation. You'll hear sounds from Appalachia all the way to Arabia, and from Bombay to Britain. Great guitarists from Tony Rice to Jimmy Page, Chet Atkins and Duane Allman. Not to mention Eric's interpretations of classic songs played on his Irish bouzouki that simply have to be seen to be believed. You never know what song or even what instrument he will play next.

Eric has taken advantage of living in one of the most picturesque and beautiful areas of the USA by creating his ground breaking Hiking Jams video series. Featuring some of the most scenic waterfalls and vistas in W.N.C., Eric has fused live music and improvisation against the breathtaking backdrop of the area's natural beauty. His video series was featured in Mountain Express. More episodes of the series are in production.

Over the past 7 years, Eric has helped raise over 150,000 US Dollars for Autism. From supporting the St Gerard House early intervention center in Hendersonville, to putting on festivals to help the Autism Science Foundation and other organizations, Eric's passion to help stems from his own experiences raising his daughter with autism. He is committed to further educating people and raising awareness about the disorder, in addition to spreading hope through his music to those dealing with it.

Don't miss a chance to see and meet Eric if he is appearing near you.