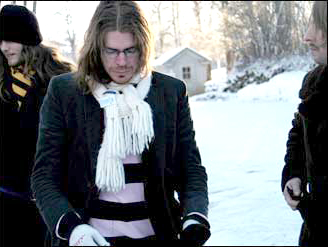 Elope is a righteous power trio in the tradition of Cream, and the first album ‘The No Name Record’ (2003) is a collection of glassy-eyed classic rock escapism. Possibly the mellowest stoner rock album ever, infused with the spirit of the aforementioned Cream, plus broad hints of Badfinger, The Pretty Things, Pink Floyd, Neil Young, uncannily Beatlesque at times; and akin to more modern marvels like Parasol faves Delta and The Green Pajamas! And maybe it's like Supergrass and The Super Furries after a few liters of Quaalude Quoolaid.

Thrill to the compelling sweetness of vocalist and guitarist Sebastian Aronsson's wandering voice and breathtaking guitar gymnastics, bassist Tomas Eriksson's frilly runs and dreamy harmonies, while drummer Anders Persson gets all Ginger Baker and Ringo Starr with it, way back in the pocket. Swedes adore their Neil Young so naturally there's a cover of Young's "Bad Fog of Loneliness", starkly drawn, as are all the band's originals. Understated to the point of paranoia.

If the name is at all familiar maybe it's because Elope previously had a split with California's Backbiter on Man's Ruin at the turn of the century, released just as the label was disappearing into the haze.

Next two albums, recorded together but with the songs slip between rockin' and mellow.

"3WD" is the rockin' record of the pair and falls in line with the Cream, Badfinger, Beatles comparisons heaped upon their briliant debut album "The No Name Record". Elope offer up another helping of late-60s, early-70s classic rock escapism, the kind that Scandinavians seem to be born into. From the serpentine Cream-meets-Faces romp of title track “3WD” to the beauteous flower-power-poetic-serene-pop-McCartney-Lennon-maximalism of “Misbehaving In The Summernight” to the ecstatic Neil Young & Crazy Horse-esque “Not Even Close”. I mean, what’s not to love about a song called “Misbehaving In the Summernight”?

The sequel, ‘9 Distilled Dreams’ is perhaps Elope's finest album to date...and that's saying something considering how brilliant their debut 'The No Name Record' and last year's '3WD' are! It is also their very mellowest, perchance therein lies the magic? '9 Distilled Dreams' is the mainly acoustic companion piece to the rocking '3WD', both albums recorded during the same marathon sessions, with the song split between the two "moods". 9DD explores Elope dreamy side, their hazy prog-mellowosity referencing a big time Big Star vibe, with nods to Pink Floyd, Neil Young, and even CSNY...

SAN FRANCISCO BAY GUARDIAN: "Mashing together such titanic influences as Neil Young, Badfinger, and (gulp) the Beatles is hardly novel, even from a Swedish stoner rock band. Still, I keep dialing up this mellow, mesmerizing album on the iPod and digging it hard every single time."