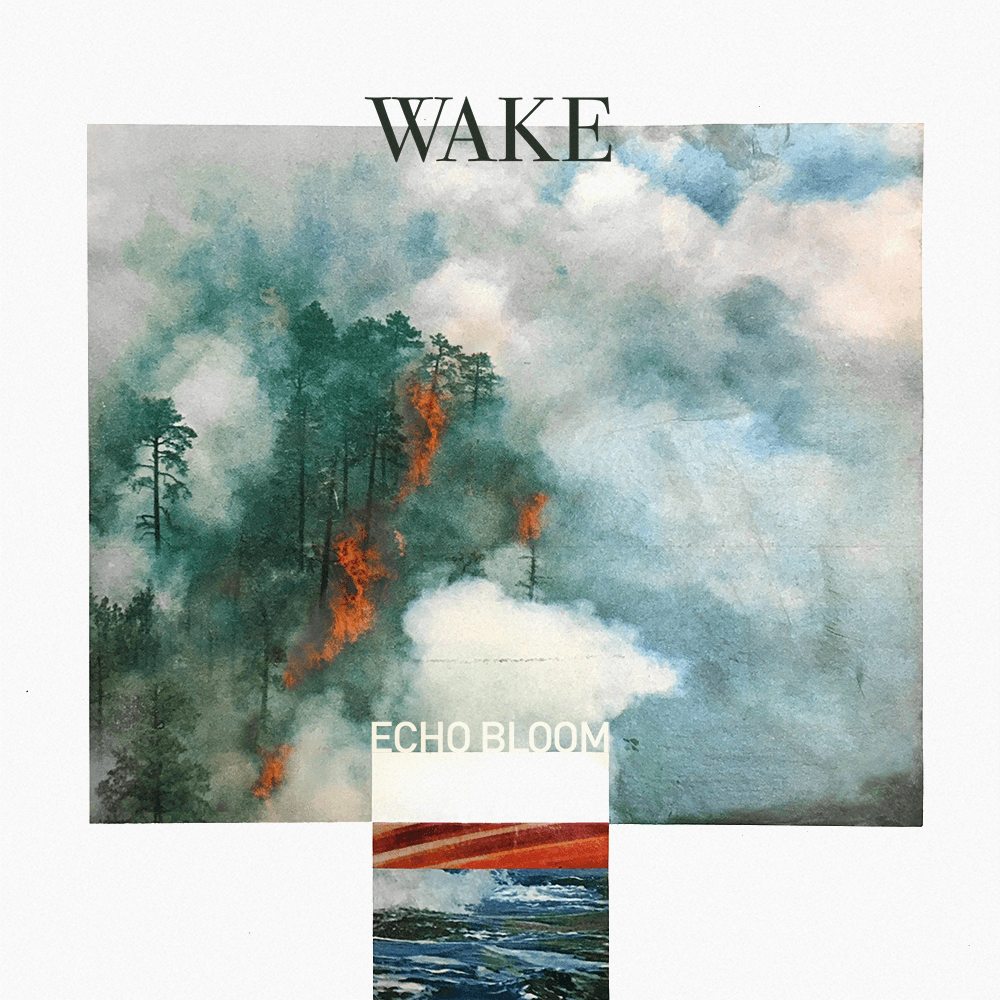 It is a bright, spring day. Your morning cup of coffee is warm in your hands as you turn on the TV to find that there has been a nuclear accident, and everything you know and love will be gone in 20 minutes. You look outside at your suburban neighborhood and suddenly, your world is no longer your own.

This is the scene that sets in motion Echo Bloom’s "Wake", a vast, colorful portrait of a universe that feels eerily similar to our own. Principal songwriter Kyle Evans weaves tales of the onset and aftermath of environmental apocalypse, of disillusionment with the American Dream, of ghosts from a far away past, again and again exploring what it means to be a stranger in your own home, your own neighborhood, your own life.

“There’s a degree of removal and disassociation. I think to a certain extent that is kind of how I feel right now”, Evans says of the music, which was in part inspired by the current political climate, where the systematic destruction of the natural world continues to unfold. “There’s this vague sense of existential dread just pounding away at us day after day”.

Evans, who grew up spending his summers camping across the American Southwest with his family in an old Ford Aerostar, cites his acute connection to nature as an impetus for illustrating his bleak, yet vibrant, post apocalyptic realm. His voice punctuates a lush palette of guitars and keys with deliberate lyricism, building an alternate reality that bristles with emotion and depth.

In the record’s opening track, "3 Little Birds", Evans illustrates the aftermath of destruction with stark imagery: “No more bark on the suicide trees, just gold and pearls, dinosaur bones, colors all washed to monochrome”. His lyrics feel almost like relics, fragments of a past life resting upon the path of a weary traveler, a quality that is wholly embodied by the instrumentation as well. The drum kit, embellished by drummer Cody Rahn with found metal hubcaps, aluminum foil, wing nuts, sets a scrappy, textured pace for the post apocalyptic odyssey. Evans’ distorted guitar screeches in and out of the mix, leaving space for a vocal solo from Aviva Jaye, who wordlessly captures the haunting nature of this abandoned place.

“A new primitive culture has emerged”, Evans says of the song. “Worshipping the faded relics of a past society they have no connection to. Survival blends into spiritualism and ritual”. So too, does the song feel entrenched in ritual, returning again and again to the song’s namesake: “3 little birds, up in the sky, drying their wings in the dead sunshine”.

In the searing "Don’t You Want To Be Loved", Evans lingers on the collapse of a much smaller world. Tracing the morning of an unnamed narrator as they wander through their own home, Evans paints a desperate portrait of an individual who has come face to face with the American Dream, and doesn’t know how they got there.

“There have been moments in my life where I've seen the breadth of the future arranged before me in some wave of neatly ordered, predictable fence posts”, Evans says. “It’s always been something that’s filled me simultaneously with a warm sense of certainty, and a hollow sense of dread”.

It is in that push and pull between security and terrifying predictability that the song exists, shifting from the lonely walk through a house of strangers, to the unabashed desire to belong within it. "Wander down the empty hall, smiling family on the walls, see my face, in every frame”, Evans delivers, a chill in his voice as he dives into the urgent chorus. “And I want it to be me, don’t you want to be loved?”.

"Wake" was produced by Kevin Salem (Rachel Yamagata, Yo La Tengo) and Kyle Evans, and was recorded between Woodstock, NY, and Brooklyn, NY. It features Kyle Evans, Aviva Jaye, Cody Rahn, and Alex Minier. Since forming in 2012, Echo Bloom has released 3 studio records and have toured extensively across the US and Europe. They have been featured in American Songwriter, and Paste.