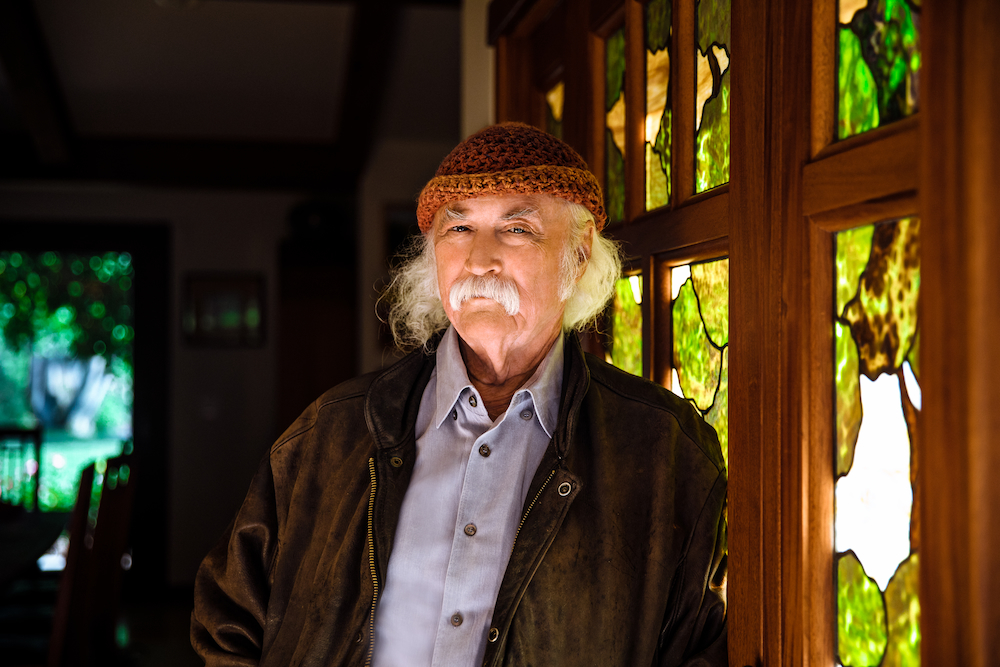 On his new album "For Free", coming out July 23rd, 2021, via BMG, David Crosby shares the latest offering from a life devoted to the pure and powerful alchemy of music. Arriving just a month before his 80th birthday, "For Free" finds the folk rock legend continuing to tap into the tremendous surge of creativity he’s experienced since the making of his acclaimed 2016 album "Lighthouse", this time collaborating with the likes of Michael McDonald, Donald Fagen of Steely Dan, and multi Grammy award winning artist Sarah Jarosz. With a transcendent quality that lies somewhere between poetry, prayer, and wild-eyed rock'n'roll, "For Free" yet again reveals Crosby’s rare gift for imparting essential truths with both undeniable warmth and a profound sense of wonder.

Made with his son James Raymond, a multi instrumentalist who also served as the album’s producer, "For Free" features a number of the musicians who joined Crosby on 2017’s "Sky Trails", including saxophonist Steve Tavaglione and drummer Steve DiStanislao. Although much of the album encompasses the intricate textures and complex grooves signature to the Sky Trails Band sound, its title comes from Crosby’s gorgeously sparse cover of a Joni Mitchell classic he’s returned to many times over the years. “Joni’s the greatest living singer songwriter, and 'For Free' is one of her simplest”, notes Crosby, who’s accompanied by Jarosz on the track. “It’s one of my favorite songs because I love what it says about the spirit of music and what compels you to play”. True to the original version, “For Free” unfolds in a delicate piano based arrangement, with Jarosz and Crosby’s voices channeling awe and sorrow to spellbinding effect.

The follow up to "Here If You Listen", a 2018 album created with Michael League of Snarky Puppy, Michelle Willis, and Becca Stevens, who also collaborated with Crosby on "Lighthouse", "For Free opens on “River Rise”, a majestic and massively uplifting number co-written with James Raymond and Michael McDonald, who also lends his iconic vocals to the song’s soaring harmonies. “‘River Rise’ came from wanting to write something very evocative of California, but almost with a country song perspective, something that speaks to the empowerment of the everyman or everywoman”, says Raymond.

In a particularly meaningful turn for Crosby, "For Free" also includes a track penned by Donald Fagen expressly for the album. “Steely Dan’s my favorite band and I’ve admired Donald a long time, so that was a thrill for us”, he says. A sharply detailed portrait of outlaws, angels, and drugstore cowboys, “Rodriguez For A Night” merges Fagen’s sophisticated storytelling with Crosby’s warmly commanding vocal presence, ultimately making for a glorious collision of worlds. Crosby taps another friend for the album’s striking cover art, using a portrait Joan Baez painted of him.

As the most recent achievement in an unparalleled career, one that’s included co-founding such culture defining bands as The Byrds and Crosby, Stills & Nash, both of whom have been inducted into the Rock And Roll Hall Of Fame, collaborating with the likes of James Taylor, Joni Mitchell, Elton John, and Carole King, and gaining entrée into the illustrious Songwriters Hall Of Fame, "For Free" draws much of its power from the rarefied chemistry between Crosby and Raymond. “Can you imagine what it’s like to connect with your son and find out that he’s incredibly talented, a great composer, a great poet, and a really fine songwriter and musician all around?”, Crosby asks. “We’re such good friends and we work so well together, and we’ll each go to any length to create the highest-quality songs we can”.

For the final track on "For Free", Crosby selected a piece written solely by Raymond, the gently devastating “I Won’t Stay For Long”. Inspired by Marcel Camus’s 1959 film 'Black Orpheus' a retelling of the Greek myth of Orpheus and his attempt to bring his wife Eurydice back from the dead, the song centers on an exquisite vocal performance from Crosby, who mines an entire world of emotion from each finely crafted lyric, “I’m facing the squall line, of a thousand year storm, I don’t know if I’m dying, Or about to be born”. “'I Won’t Stay For Long' is my favorite song on the record, I’ve listened to it 100 times now and it still reaches out and grabs me, it’s so painfully beautiful”, says Crosby. “I did end up getting a pretty stunning vocal on it, because it meant so much to me that I sang the hell out of it. One thing James and I both believe is that songs are an art form and a treasure, so when a song comes along that’s as good as that one, we’ll just give it everything we got”.