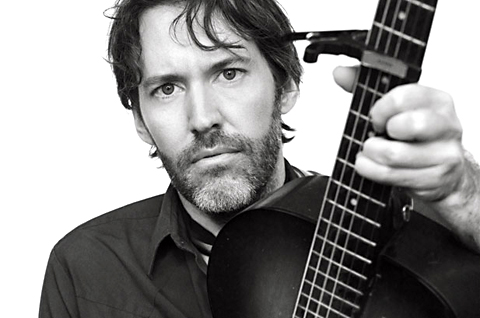 "A Friend Of A Friend" is the first record by Dave Rawlings, the guitarist, producer, singer, and songwriter best known for his work with Gillian Welch and Old Crow Medicine Show. These long time compatriots join Rawlings on this record, beside newer friends Benmont Tench from the Heartbreakers, Karl Himmel, and Nate Walcott of Bright Eyes.

The notion of recording as Dave Rawlings Machine began in 2007. “I had a few older songs that I had written with other artists that I wanted to record myself. Then the last year or so Gillian and I spent a good deal of time in Los Angeles, hanging out with a new group of musicians and songwriters. This inspired a number of songs that seemed to complete the picture. So we started recording. It was as much of a surprise to me as it was to anybody.”

Of the nine songs on the playlist, Rawlings wrote seven. The other two are “The Monkey and the Engineer,” a country blues by Jesse Fuller, who died in 1976, and a medley consisting of “Method Acting,” by Conor Oberst, and “Cortez the Killer,” by Neil Young. Rawlings learned “Method Acting” two years ago while playing guitar on a Bright Eyes tour. “I played ‘Method Acting’ every night on that tour,” Rawlings says, “and it sort of sank into my awareness in a very deep way. ‘Cortez the Killer’ is a song I heard long before I ever played guitar and it changed the way I heard music."

“Ruby” is a plaintive recitation of love for a woman whose affections are remote and self-engaged. “Sweet Tooth,” sung by Welch and Rawlings in their more customary style - two voices, two guitars sparely arranged - is an ironic and wry description of the bittersweet allure of addiction, and the obsessive pleasures and despairs revolving around the satisfaction of a powerful need. “It’s Too Easy” has a narrator blithely content with the simplest indulgences and baffled by why anyone would lift a finger for more. “I Hear Them All,” which was first recorded by Old Crow Medicine Show, is a solemn tribute to the under-equipped, the lost and lonely, the left behind, and overlooked, and a condemnation of the outrages that the powerful practice against the weak. “To Be Young,” a kind of half-apology, half-screed both justifying and rebuking imperfect behavior, was written with Ryan Adams. Rawlings’s version features his banjo playing. “How’s About You” is a rueful, Depression-tinged monologue reflecting on hard times, past and present. The record concludes with “Bells of Harlem,” which has an eerie, spell-like quality. It is the sort of simple, classic-sounding melody that one can imagine being sung by Louis Armstrong or being used as a soundtrack for a David Lynch film. A mesmeric coda, played by strings, trails off at the end like lights rising in a dark theater.

Making "A Friend Of A Friend", Rawlings discovered that different considerations applied when recording himself singing melody instead of harmony. “When I listen to a Gillian record there’s a particular place and feeling in it that has an awful lot to do with the sound of her voice,” Rawlings says. “A lot of things change from track to track, but that has always been the constant. And a lot of the arrangements we’d worked out over the years - the way we put chords, the way we sing together - I was shocked at how little they worked for my voice or my record. We had learned to make records in a particular way because we were always framing her voice, which is this large, takes-up-a-lot-of-space, very intimate, very good sounding thing, a beautiful tone, so you can frame it in a skeletal way. It almost seems to me that the less you put on her records, the more powerful they are, but when we started working that way with my voice, which is so different, it turned out that nothing from that approach was valid, so we had to find different sounds and treatments that we were happy with. I was really surprised when we started that we were in territory as uncharted as we were. We broke new ground from necessity.”

Spontaneity was an important part of the recording. “I've learned over time that as a lead singer, I do my best singing live and on early takes, so it was essential that we capture the band quickly and in an organic way. So when we stood in a circle to rehearse the first song I thought, ‘Well, I guess we better put a mic in the center and be done with it.’ It tied my hands as far as mixing the vocals went, but it helped us capture something in the air. I knew that Gillian and I would be at the core of the recordings, but I became interested in a particular acoustic sound with more vocal parts that I knew the Crows could conjure up. Karl, Benmont and Nate were the icing on the cake.”

"A Friend Of A Friend" has more lavish arrangements than songs from the Gillian Welch catalog typically do. They are more boisterous, but they are built on the same careful spine that Welch songs are. Rawlings’s sly and succinct guitar playing is embedded within ensemble play as opposed to carrying the bulk of the arrangement. The songs are exuberant, sturdy, and carefully constructed, but they also reverberate poetically. The music on "A Friend Of A Friend" is cousin to the deftly modern and haunting music that Welch and Rawlings are known for, but it has here been expanded; the crowd is larger, the party more robust, but the room is the same room.