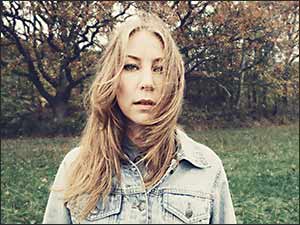 Caroline Wickberg started writing melodies and lyrics as a child. When she was introduced to the guitar the interest in harmonies started growing, and it is still central in her songwriting today. Her reflective personality has always had the need to phrase itself and be communicated through music.

After a few teenage years of rejecting the guitar she studied music in her early 20’s and discovered country and jazz for the first time. Her dreams of becoming a jazz singer were shattered when she realized the only thing that made her voice sound good was when she sang was her own songs.

Turning her attention towards producing music she continued studying and ended up a sound engineer. Always close to, but at safe distance from the stage. With new 5 song EP ”I’m Not Mad”, she is ready to step out in the light and share her songs.

The EP circles around separation, death, letting go and the confusion and clarity that comes with it. How do you know if you’re finally truly happy, or if you’re farther away from reality, and deeper into the madness of the mind, than ever?

The music surrounding the lyrics has grown from Carolines Wickbergs roots in pop, country and jazz. The playfulness in her earlier work has developed into something darker and sincerer, searching inside herself for answers and inspiration instead of in the world outside. With wonderful help from friend and producer Henrik Alsér, Caroline’s acoustic songs spread out to become little landscapes.