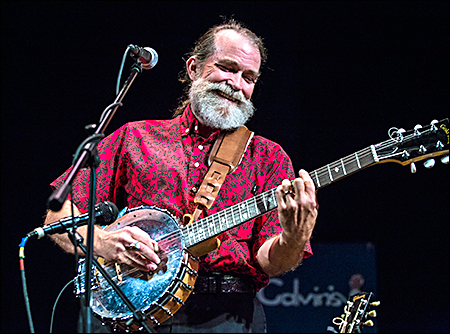 2014 winner of the Grassy Hill Kerrville New Folk songwriter contest, C Daniel Boling shares experiences from a life well lived in places as far ranging as Okinawa, Japan, and Padre Island, Texas. This balladeer and songwriter with the friendly tenor brings his well crafted story songs to happy audiences coast to coast and in Europe in over one hundred shows a year, from house concerts and listening rooms to major festivals.

Born into a traveling Air Force family, he later worked as a National Park Ranger (yes, the gun toting kind) and as a criminal investigator for the US Bureau Of Land Management. He started touring at 50, an age when most guys are planning their retirement. He has released 7 albums since 1999, including ”These Houses” produced by Jono Manson and to be released in late 2016 on the Berkalin Records label.

Daniel’s songs tell interesting stories about a variety of characters, including himself. He plays the guitar and banjitar (a banjo and guitar hybrid) with a deft fingerpicking style that always enhances the stories, and a bit of harmonica into the bargain. His clear tenor draws positive comparisons to John Denver and Pete Seeger, and like Pete, Daniel is happiest when his audiences sing too.