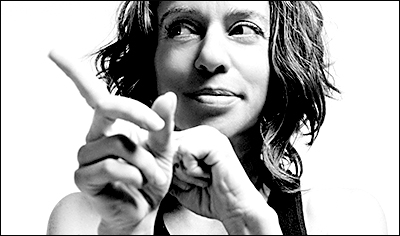 Righteous Babe Records and singer songwriter activist Ani DiFranco announce her 20th studio album "Binary", set for a June 9th, 2017, release. With "Binary", the iconic singer, songwriter, activist, poet, DIY trendsetter returns to territory that brought her to the world’s attention more than 25 years ago. One of the 1st artists to create her own label in 1990, she has been recognized among the feminist pantheon for her entrepreneurship, social activism, and outspoken political lyrics. At a time of global chaos and confusion, DiFranco is kicking ass and taking names, with a set of songs offering a wide range of perspective and musical scope.

The album will also be available from the merch stand on Ani’s European tour dates and digitally from all the major streaming and download services continent wide.

Written prior to the 2016 election, the songs on "Binary" are prescient of the current political situation in America. Ani tackles the challenge and necessity of teaching non violence with “Pacifist’s Lament” and the need for empathy in “Terrifying Sight”. “Play God”, a rallying cry for reproductive rights, is currently playing out in congress. And on the title track, DiFranco reveals the larger meaning of the album. “This binary principle is echoed throughout our bodies“, Ani notes. “With one ear, we hear, but only with 2 ears can we perceive the full spectrum of depth and position. This idea that refuses now to let me go, that nothing can truly exist except in relationship with something else, is where this song and this album are coming from”.

The backbone of "Binary’s" sound is DiFranco’s long time rhythm section of bassist Todd Sickafoose and drummer Terence Higgins, but on much of the album, the trio is augmented with some all star guests. Virtuoso violinist Jenny Scheinman and keyboard wizard Ivan Neville both join in for more than half of the record. Other contributors include the legendary Maceo Parker, Bon Iver’s Justin Vernon, and Gail Ann Dorsey, longtime bassist for David Bowie. New Orleans resident DiFranco takes special pride in the Crescent City funk spearheaded by natives Higgins and Neville on a number of the tunes. “Their souls are of this place”, she says. “The feel they bring is something they got in utero”. When it came time to mix Ani turned things over to Tchad Blake, the result a bold sonic imprint elevating the songs to a new level in her canon.

"Binary" represents the 1st album release from a European joint venture between Aveline Records and Righteous Babe Records. The Aveline Records label was established in the UK in 2016 by the triumvirate of long time Righteous Babe European representative Ian Blackaby, Lizzie Evans of Evans Above PR and Immy Doman co-founder of the legendary Green Note venue in London's Camden town.

DiFranco spent much of 2016 on the "Vote Dammit" tour, driving home the need to get out the vote for the local, congressional and presidential elections. In the days following, fans turned to her for guidance with renewed earnestness, anxious to hear music and wisdom from the longtime activist. Ani encouraged fans to take political action and did the same herself, participating in the Women’s March on Washington and performing at the official Women’s March after party benefiting Planned Parenthood with The National and Sleater Kinney.

Ani will be honored with this year's Independent Icon Award at the American Association of Independent Music's Libera Awards ceremony in June. She will be performing in Europe this summer for the first time since 2014, including appearances at Glastonbury Festival and the London Palladium.