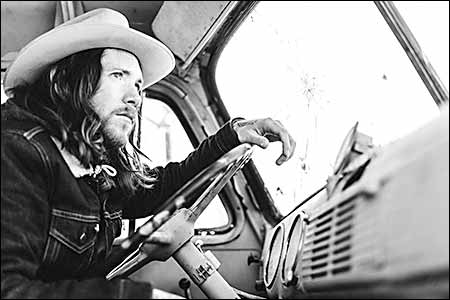 Singer songwriter Andrew Sheppard grew up in Hailey, Idaho, in an extended musical family, his mother was always playing and singing in rock and blues bands. As a kid Andrew was always at his moms rehearsals and live shows, drawing in the music as a constant. Sheppard was playing bass in punk rock bands in high school and by the age of 19, he picked up the guitar and started writing his own songs. 10 years later, he is poised to release his sophomore album, ”Steady Your Aim”.

”Steady Your Aim” is a concept record, a musical journey in which every song was methodically thought out to fit the record. An analog recording, it is a cinematic dreamscape narrative that is richly layered with the pedal steel, piano, cello, wurlitzer and b3 organ. All of their parts are gently tucked in which leaves the listener wondering just what it is they are actually hearing. “We used traditional sounding instruments to create a new sound”, said Sheppard. “For example, we used cello on this record because I wanted a deep sound that didn’t come from anything electric or synthetic. Instead of being a lead instrument we used it as a texture tool giving the songs a more rich and real feel”. Produced by Sheppard, Eric Loomis and Wes Walsworth, both of whom play guitar on the album, ”Steady Your Aim” was recorded at Ivy Hall Studio in Nashville, Tennessee. John Mayfield at Mayfield Mastering mastered the record.

Leaving Idaho just after high school, Sheppard headed to Los Angeles, California, to pursue his other passion, skateboarding. After a blown out knee derailed his skating plans, he shifted his focus back to writing music. In 2008 he formed the band, Gypsy River Haunts that disbanded in 2012. Feeling the need to roam, he bought a car, loaded up his dog and headed around the country collecting stories for what he deemed his ’record writing road trip’. After 8 000 miles of driving, Sheppard wound up back in Idaho with no plan to stay, but realized after landing, that all his childhood friends were great musicians and that he had everything he needed to make the record he had in mind. Packing it up for a trip to Los Angeles, Sheppard and pals recorded ”Far From Here” in 2015 at Bedrock Studios before heading back to Idaho. “I realized how much more I thrive in a mountain town”, said the artist. “I need to be in nature to feel a bit more sane”.

But a slower pace doesn’t mean that Sheppard has slowed down. He is on the road constantly, both solo and with band, playing festivals such as Stagecoach Country Music Festival, Treefort Music Festival, The Feed L.A. Festival and The Northern Rockies Music Festival. He’s shared the stage with The Black Lillies, Ray Wylie Hubbard, Whiskey Shivers and Scott H Biram and has toured with friend and fellow roots musician, Jeff Crosby.

On ”Steady Your Aim”, Sheppard doesn’t sugarcoat any of the emotions in his songwriting. He writes honest music that comes from the heart and darker places in life. The first track of the album, “Take A Walk With Me”, is inspired by packing up his life in L.A. and heading back to the mountains. ”I was tired of the coast, so I booked it for the pines. Took a swing at the open road and caught up with my mind”. The more somber 2nd song, the title track, is a response to the 1st song, where he is taking the musical journey and dealing with the trials and tribulations of what being a musician on the road means. “The instruments are meant to make you look at everything widescreen, like watching a film”, he explains.

From the sad and happy, “Here At The Bottom”, to the protest vision of “Not My Kind”, to the traditional, yet modern, waltz of “Holy Water”, ”Steady Your Aim” takes you on a musical journey from start to finish with a modern and experimental sound. Sheppard writes songs and music that isn’t a carbon copy of other country and americana artists, and that touches on subjects you don’t typically touch.

“Writing a song is something that I don’t, and won’t take for granted”, Sheppard vows. “Every show, every tour and every album provide me with new insight and a new way of looking at life. It helps me grow as a person and an artist and I want to see where that takes me for the rest of my life”.