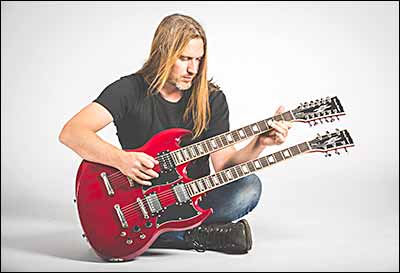 Andrea Van Cleef was born in a small town near the northern Italian alps. After spending his post teenage years doing various jobs and playing guitar and bass guitar in different garage punk outfits, he founded his first real band, the dark alt rockers Bogartz. He starts singing because nobody in the band wants to sing, and he hasn't stopped since.

In 2002 the Bogartz release their debut album, "Honeymoons In The Desert". It earns rare reviews and a cult status for the band. During the live shows to promote the record, the band gets entangled in major labels net. 3 years are lost in management's effort to smooth the edges of their music, and at the end of 2005, the Bogartz call it quits.

Andrea then releases his 1st EP under the Van Cleef Continental moniker. "8 Shots, 8 Failures", the EP, is then followed in 2009 by "Red Sisters", which is released in the USA. The 1st single, the band's rendition of Mike Oldfield's "Moonlight Shadow", is a minor radio hit, and the record earns ecstatic reviews in the national press. The band tours extensively to promote it, playing clubs and important italian open air festivals, sharing the stage with Willard Grant Conspiracy, Dead Meadow and Gaslight Anthem, among many others.

In 2010, Andrea starts touring alone for the 1st time, playing his old band's songs, as well as selected cover versions of other artists'. During the tour, 57 gigs all over Italy and Switzerland, he starts to feel the need to record new songs in a singer songwriter style. And he starts writing new songs. With "Sundog", for the first time, songwriter, musician and producer Andrea Van Cleef plays acoustic songs, and his distinctive baritone isn't surrounded by thundering drums and overdriven guitars and basses. His music here is a re-interpretation of the experimental folk music of the early 70's, merged with the songwriting sensitivenes.

And now, in the summer of 2018, Andrea Van Cleef releases his sophomore release, "Tropic Of Nowhere".